The first anniversary of Kevin Kouzmanoff’s awful trade was this past Saturday. I can’t believe that it’s been a whole year since the Padres traded away my baby.

Since that terrible day, things just haven’t been the same. I didn’t get to see Kouz all year, which is just strange.

I’ve had a connection with Kouz ever since he signed autographs for me and my friends way back in 2007. It meant so much to me that I fell in love with him right there and then. Also, both of our rookie seasons was 2007. We both had a taste of the majors in the end of 2006, but both of us really got into it in 2007.

Ever since that night, Kouz has been my all-time number one favorite baseball player ever. First of all, he’s a great baseball player, and he’s really nice and funny and I loved having him here in San Diego.

I’m sure all of you guys know what it’s like to have a favorite player on your team. It just makes your fanhood so much more fulfilling to have one specific special player that you cheer for. I’ll always be a fan of the Padres, the whole team, no matter what players are on it, but it was a lot more fun to be able to watch a guy that I loved watching play as much as Kouz.

As a Padres fan, you kind of have to be wary of the players on the team, especially when Moores was in control, because the name of our game is rebuilding. Any of these guys could be traded away, just like that. Now, I had gone through a lot of tough trades before the blow on January 16th, 2010. I thought that losing Jake Peavy and Trevor Hoffman was tough. But it was nothing like losing my all-time favorite player.

Of couse, Kouz is still my favorite player. He always has been and always will be. But it’s so sad that I can’t cheer for him here. He’s not on the Padres. He’s way up the coast with the A’s.

Kouz, it was a hard season without you. Thankfully, we were winning enough that I didn’t think about it too much, but still. It was so weird without being able to cheer for you here. I’m so happy that you had a good season, though, and I really hope that someday, someday, you’ll be able to come back and play for the Padres.

Thanks so much for everything, Kouz. I love you!!!!! 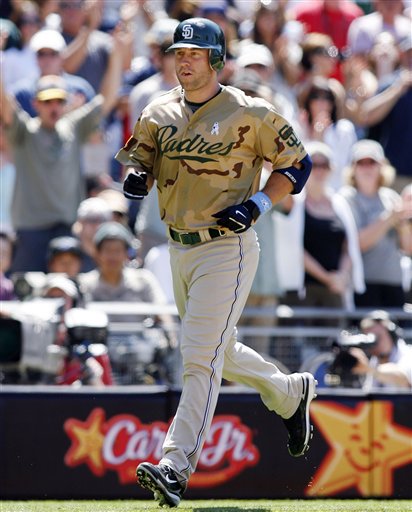