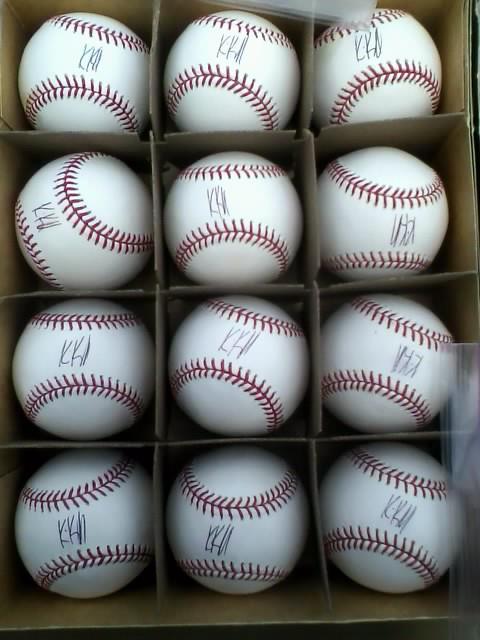 One of my favorite parts of FanFest – finding a ton of Kevin Kouzmanoff signed baseballs. Super cool. This photo is now permanently the background on my phone. More on FanFest to come later.

Just thought that I should let you guys know that Kevin Kouzmanoff (finally) got signed by the Kansas City Royals for a minor league contract with an invitation to Spring Training last week. It isn’t much, but at least he did get signed. I was getting a little worried there.
Though I would have preferred that he got signed by the Padres, at least he is going to be playing. In Triple-A Omaha. But whatever.

Also, Jan. 16 was the two-year anniversary of his trade from the Padres to the Oakland A’s. That was such a sad day. I can’t believe it’s been two years already. Thankfully, I did get to go see him in August when he was with the Rockies. That was the coolest game ever.

I’m just happy that my boy is still in baseball and still doing the best he can. He hasn’t had an easy career, that’s for sure, but he’s fighting hard. I love him 🙂

Unfortunately, the Padres won’t be playing the Royals in Interleague this season, so I won’t get to see him at all. But hopefully next year, when he gets traded back to the Padres. Right Padres? Right. Sounds good.

I got to see Kevin Kouzmanoff yesterday. After two years, I got to see the player who means the most to me in all of baseball. I got to see my all-time favorite baseball player here in San Diego. It was fantastic.

At about 5 p.m. last night, I was sitting in the bleachers when Colorado Rockies players started streaming out of the visitor dugout. I hustled over to the third base side of the field to see none other than Kouz.

Though I wasn’t paying much attention, the game went really badly. We had eight hits and no runs. The Rockies had seven hits and three runs. It stunk. Will Venable made a horrible error that was actually ruled a triple, but it cost us the game, so it should have been called an error. Even without the error though, the Padres’ offense was nowhere to be seen.

Kouz went 0-for-4. He got on base in the top of the ninth on a force out. Defensively, he allowed made one really great play, but the throw wasn’t in time to first base. He was not happy about that one. But it didn’t matter (like the Padres could actually score a run).

We lost 3-0, which added another loss to our eight-game losing streak.

After the game was the Friday night fireworks. I thought it was going to be kind of pathetic, but they weren’t kidding when they called it “Friday Night Fireworks Spectacular.” It was a legitimately good show! It would have been more fun if the Padres had won, but it was very cool anyways.

I can’t tell you how cool it was to see my baby again. I’m so thankful that he’s back in the NL West. Last night was a wonderful birthday present.

We just got swept by the Dodgers. Which really stinks, but what stinks even more is that we got swept the series before that too, by the Diamondbacks. Not good at all.

Seven game losing streak. It hasn’t been a good season by a long shot, but a streak like this is annoying anyways. At least we had been getting in a win every few games consistently. But losing so many in a row? That’s rough, man.

And now we enter the month of the NL West. We are literally playing teams from our division every game in September EXCEPT for the last series of the season, which is against the Cubs of all people.

We’re coming down to the end, folks. Some might be relieved. For me, I’ll be glad to see the end of the season and the start of hopefully a better team next year. But I’ll miss my boys a lot. Football is great and all, but nothing compares to Padres baseball. And really, this season hasn’t been too hard on me at all. Sure, we were in the basement all season, but like I said, we were able to win at least one game in every series pretty consistently, and that made things easier.

But we’ve still got some game left. Starting with this Friday, when Kevin Kouzmanoff and the Rockies are coming to town. Yours truly will be in the stands near third base, drooling over that fine third baseman. So excited. I can’t wait to see my boy and take a ridiculous amount of pictures of him. The Rockies haven’t been doing so hot lately either, so maybe my boys will have a chance. GO KOUZ!!

Guess what? I’m going to see Kevin Kouzmanoff next week!!

The Rockies are coming to town next weekend, with the newly aquired Kevin, and my parents bought me tickets as an 18th birthday present. Thank you!!!

I am so excited beyond belief. I haven’t seen Kouz since 2009, before he was traded. I am so happy that he’s back in the National League, back in the NL West. Even if it is the Rockies, it’s much better than the A’s. Now, at least we’ll get to play against him a lot more that we could have against the A’s.

I’m sitting near third base, so I’m going to get to stare at his beautiful face all game long. I just want to see him, cheer for him (just him, not the Rockies), and maybe, just maybe get the chance to talk to him. That would be so cool. I really, truly have missed him these past couple years. I can’t wait to see him!!!

Kouz has now been called up to the Rockies!!! Yay!!!! I’m really, really happy for my boy. It’s good to see that he’s going to finally get back in the majors. And guess what? We’re playing the Rockies next weekend at home. Oooohhh…an idea comes to mind. I need to go!

ANYWAY, the Padres won last night! It was so great. Gotta love beating the Giants. We won 7-5. The Giants tied the game 5-5 in the bottom of the eighth, but thankfully, we got two runs in the top of the ninth, and Heath Bell got the save.

Speaking of which. Heath Bell got placed on waivers yesterday, and the Giants claimed him today. I don’t think he’ll actually go over to them, but it would be kind of funny. No, not really. I love having Heath here. It would be really sad if he went away. 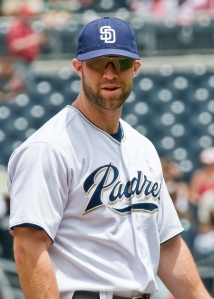 Big news: Kevin Kouzmanoff has been traded from the Oakland A’s to the Colorado Rockies!

I’m really excited for my boy. He was playing in Triple-A for the A’s, and he’s probably going to be doing the same for the Rockies, but this is a new chance for him. I’m excited for him.

Especially because he grew up in Colorado, he must be so thrilled. Even though the Rockies aren’t my favorite team, I would be so happy to have him play with them because that would mean that he’s in the majors. And I’m pretty sure he would look really hot in that purple and black.

Congrats, Kouz. You’d better be appreciated by those Colorado Rockies. 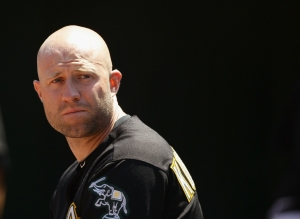 If you’ve been reading this blog for any amount of time, you probably know that I’m a HUGE Kevin Kouzmanoff fan. I’ve loved that guy ever since he joined the Padres in 2007. He’s just the sweetest, cutest guy, and he was an excellent third baseman when he played for us. I absolutely love him.

But then there came a day that broke my heart: January 16, 2010. The Padres traded away my baby to the Oakland A’s for Scotty Hairston and Aaron Cunningham. I was devastated. I had already endured two really hard partings when the Padres got rid of Trevor Hoffman and Jake Peavy. I thought those were hard. But trading Kevin Kouzmanoff…that was a huge blow. Kouz wasn’t the only reason I was a Padres fan, but man, it sure helped to love a player that much.

So after Kouz was traded, my fanhood suffered. Not going to lie. It was actually really hard to not have a favorite player to cheer for. Don’t get me wrong, I am a Padres fan, no matter who’s on the team. I will always be a Padres fan. But there was something about Kouz that made me even more excited about the team. I tried to make myself find a new favorite player after he left, but it didn’t work at all.

I still miss Kouz to this day. Chase Headley has been good for us at third, but he doesn’t have a glove in the Hall of Fame (thanks for that reminder Gaslamp Ball.)

Anyway, the whole point of this blog post is that Kouz was sent down to Triple-A a few days ago. As he was, I was shocked! He hasn’t been in the minors since 2006! He’s a proven major league player who has a lot of injuries and stuff, but he’s a solid ballplayer. I can’t help but be reminded of early 2007, when Kouz was doing so horribly for the Padres. Despite the cries to send him down, Bud Black stuck with him, and eventually, Kouz got out of his rut. But the A’s didn’t do it that way.

Before he got sent down, Kouz was hitting .221 for the A’s. I don’t know why that’s such a big deal, because the Padres’ entire lineup had batted below that multiple times, and we didn’t do anything as drastic as sending a major league proven player down to Triple-A.

I don’t agree with this move at all, mostly because I’m such a big fan of Kouz’, but really, do the A’s think that going down to Triple-A will help him? He’s been in the majors for five years. I think that most players get to a point where they’re just not going to get any better. Kouz is not a bad player, but I don’t think his skill comes naturally. He has to work super hard to keep himself in shape and game-ready, and his poor back doesn’t help too much either.

I do hope that this move will help Kouz more than hinder him. It’ll be weird to see him in the minors for a while, but hopefully he will tear it up down there and be called back up really soon.

I love you Kouz. And man, I miss you so much.