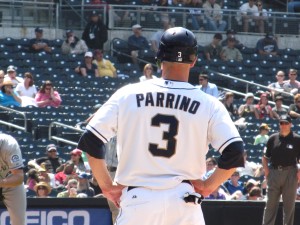 I’m back! I am happy to announce that I have officially finished my freshman year of college – meaning that I actually have time to blog now. It’s been forever, I know, but I am really excited to get back into writing about the boys.

Not that there’s much to say about them. We lost 8-1 today against the Dodgers, all thanks to former Padres pitcher Aaron Harang. He was dealing. We couldn’t get a thing off of him.

The positive, of course, is that we “split” the series with the Dodgers. One game each. I don’t feel like you can really call a two-game series a series, but whatever. We’re grasping for straws here.

Currently our record is 14-25. Miserable. Not that anyone cares, but we’re 11.5 games behind first place. So much fun.

But there was a huge bright spot to today, which was that Orlando Hudson was released and Jason Bartlett was put on the DL. That should improve at least Padres fans’ morale for a while. I am actually thrilled that the Padres finally, finally made these moves. I’m really excited also because this means that Andy Parrino will hopefully get more playing time.

Looking ahead to the weekend, we’re starting Interleague Play against the Los Angeles Angels of Anaheim and Albert Pujols. I’ll be out at all three games – so excited to get out to the ballpark to see the boys. It should be a fun weekend. I am actually excited to see the Angels. They’re only slightly better than the Padres record-wise, so it would be great to win at least one good game against them.

It’s good to be back. 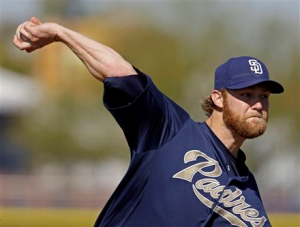 In the first few games of this season, pitcher Andrew Cashner has been getting notice because of his pitching speed. Though hitting 100+ is impressive, it’s not when you don’t have any control. Like walking three straight batters in a tie-game situation.The Padres lost 9-8 to the Dodgers tonight in a very bizarre game where the Padres were able to come back from a deficit only to hand the win back.

For the first three innings, the Padres went 1-2-3 except for the first inning, when Cameron Maybin led off the game with a single. Other than that, Aaron Harang put down nine in a row. Just lovely.

Finally, Will Venable broke that with a leadoff home run in the top of the fourth. The Dodgers had a 4-0 lead at the point, so that was huge. We ended up getting three runs in that inning, closing the Dodgers’ lead to one run.

But then the Dodgers got four more runs in the bottom of the fourth. We didn’t score until the top of the seventh, where we got three MORE runs. So run production was not really our problem in this game. We had nine hits, while the Dodgers only had six.

What was the problem was the ninth inning. Going into the inning, we were losing 8-6. Chris Denorfia walked to start the inning, and then there were two swinging strikeouts. Got that, two outs. The Padres do not do well with two outs ever.

Chase Headley hit a two-run game-tying home run WITH TWO OUTS in the top of the ninth inning. Bam. 8-8 all.

Cashner comes in to pitch the bottom of the ninth. We get two quick outs. And then the trouble starts. Andrew walks three batters in a row to load the bases. Joe Thatcher replaces Andrew and throws four straight balls to walk in the winning run. What. On. Earth.

Absolutely pathetic. The bullpen LET US DOWN. That should not have happened. I mean, Joe could have had the decency to at least throw a strike, right? PATHETIC.

Not much is giving me hope for these Padres right now. Sure, it’s insanely early in the season and I’m not giving up on them yet. But this is not fun.

Thankfully, we have the Major League Debut of Joe Wieland to look forward to tomorrow. No pressure, dude. The team is just 2-6 and in desperate need of a win, no biggie.

Check out my Storify story on this game.

We lost again. Okay, I guess we did win two games before that. But then we couldn’t overcome a one-run lead at the end of the game last night.

First of all, Aaron Harang allowed four runs in the top of the first, which was instant doom for us. There’s no way that we can overcome four runs, especially when it comes so early in the game.

Granted, we were able to get three runs throughout the game, which was an accomplishment, but we weren’t able to get just one more to tie it. Jorge Cantu hit a two-run homer in the bottom of the sixth inning for our first two runs, and then Ryan Ludwick singled in Will Venable in the bottom of the eighth for our third run. But of course, we left seven runners on and were 1-for-8 with runners in scoring position.

You know that hitting thing that I was talking about yesterday?

Well, my boys found their bats today in the third game against the Dodgers.

With the series already won by LA, we needed today’s game to avoid the sweep. The Dodgers started off with a run scored by T-Gwynn Jr. (of course) in the first. We didn’t score until the third inning, where we got an RBI single from Jorge Cantu.

Then Ryan Ludwick hit a huge solo homer in the bottom of the fourth to take the lead 2-1. We kept the lead for the rest of the game.

We won 7-2. Starting pitcher Aaron Harang got his second win. Nick Hundley was 1-for-2 with two walks and two RBIs.

It was such a good game! We really needed that win. And best of all, we were hitting really well!

I’m really excited about the boys. This next series against the Reds is going to be great. I’m going to the game on Tuesday…SOOOOOO EXCITED!!!! I can’t wait to see my boys in person. I almost never get to see them live, so it’s going to be amazingly fun. Can’t wait!!

So I was looking at our team yesterday, and we seriously have a ton of holes. I feel like guys are slipping out of our hands so fast that we can’t catch them all and they’re leaving us completely empty.

Who have we lost this offseason already? Adrian Gonzalez to the Red Sox, Yorvit Torrealba to the Rangers, Miguel Tejada to the Giants, Kevin Correia to the Pirates, and now Tony Gwynn Jr. to the Dodgers. Plus we lost Chris Young. Our roster is looking awfully thin right now.

But we have signed pitcher Aaron Harang, and we’re about to sign Dustin Moseley, who is also a pitcher. So now our rotation looks like…Mat Latos, Harang, Clayton Richard, Moseley, and Wade LeBlanc or Tim Stauffer. I don’t know. It might work, but it seems like a very unstable rotation.

Well, I guess we’ll have to see how things pan out. We’ve still got a ton of offseason left (waaaaaa), so we have a lot of time to pull a team together.

In other news, the Latest Leaders list on MLBlogs.com came out for the month of November. This blog is #5 of all fan blogs!!! I’m sooooo excited!! I think I was #5 a couple months ago, but 5 is my absolute favorite number and I’m so excited to get it again.

Of course, I can’t mention the number five without showing you THE number five:

I hope you all have a great day!!