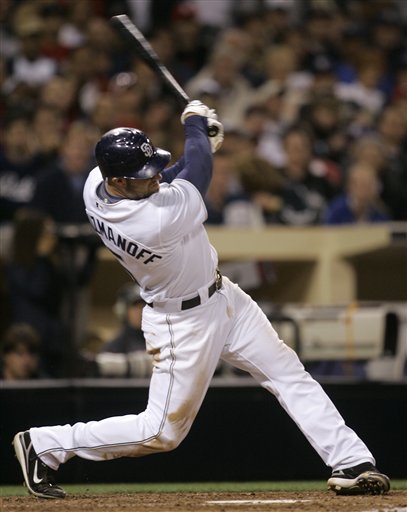 Exhibition or no, the Padres won their first game of the season yesterday, 4-3. It was a really great game for my Padres. Jake Peavy started and allowed a hit but induced a double-play grounder to get out of the inning. Soon-to-be-closer Heath Bell allowed two runs and four hits in his second. But new second baseman David Eckstein just missed one of those hits, and another one of the hits fell between three fielders. It was definitely the first game of the season…The Padres got on the board with a two-run bomb from my boy Kevin Kouzmanoff (pictured). I totally called that he was going to hit a homer. Adrian Gonzalez also drove in a run. The Mariners tied the game at 3 in the 9th off of Oneli Perez. But in the bottom of the tenth, the Padres walked-off with an RBI double by Kyle Blanks! Another highlight from this game were three double plays. Also, Chase Headley threw out a runner at the plate from left field!

It was a really good game for my Padres. I mean, we only had 7 hits to Seattle’s 12, but we got the job done. All of our pitchers were pretty good! And our hitters drew 7 walks. I think that’s a really good thing. You know, even though this game doesn’t mean anything even to Spring Training games, a win is a win. I’ve been waiting for this win since September 28! Just kidding. But it really has been a long time. Wins just feel so good! I went through a lot of losses last year, and it’s just really important that we win some games this year. It was just an exhibition game, but it was a win. WHOOOHOOO!

This afternoon we are playing the Mariners again. And this time, it will actually “mean” something. No, it’s not like the Cactus League has a championship or anything, but now we start keeping track of our record and stuff. Here’s the lineup:

I am seriously going to lock myself in my room with an energy bar (since the game starts at lunchtime) and a bottle of water. I was going to keep score, but I am seriously debating if I really want to do that. It might be a good challenge though…we’ll see. But this afternoon, I am going to listen to Padres baseball. GO PADRES!!!!!