So I was looking at our team yesterday, and we seriously have a ton of holes. I feel like guys are slipping out of our hands so fast that we can’t catch them all and they’re leaving us completely empty.

Who have we lost this offseason already? Adrian Gonzalez to the Red Sox, Yorvit Torrealba to the Rangers, Miguel Tejada to the Giants, Kevin Correia to the Pirates, and now Tony Gwynn Jr. to the Dodgers. Plus we lost Chris Young. Our roster is looking awfully thin right now.

But we have signed pitcher Aaron Harang, and we’re about to sign Dustin Moseley, who is also a pitcher. So now our rotation looks like…Mat Latos, Harang, Clayton Richard, Moseley, and Wade LeBlanc or Tim Stauffer. I don’t know. It might work, but it seems like a very unstable rotation.

Well, I guess we’ll have to see how things pan out. We’ve still got a ton of offseason left (waaaaaa), so we have a lot of time to pull a team together.

In other news, the Latest Leaders list on MLBlogs.com came out for the month of November. This blog is #5 of all fan blogs!!! I’m sooooo excited!! I think I was #5 a couple months ago, but 5 is my absolute favorite number and I’m so excited to get it again.

Of course, I can’t mention the number five without showing you THE number five: 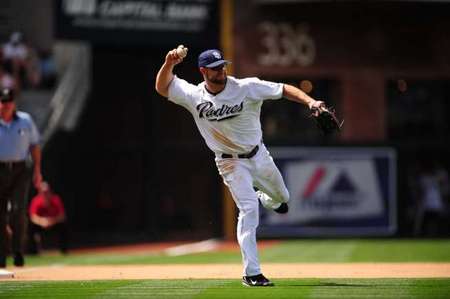 I hope you all have a great day!!

It was the top of the first, with a count of 3-2 and no outs, when Tony slammed that ball down the right field line and out of there. So cool for Tony!!

He’s not known as a home run hitter (DUH!!), he’s more of a small ball guy. But that’s gotta be great for him to get that first major league home run finally out of the way. And I’m so glad he got it in a Padres uniform, instead of that other team who barely gave him a chance.

12 years ago to the day (yesterday), Tony Gwynn Sr. hit an inside-the-park grand slam. Very, very cool. We’ve been waiting for Anthony to become a Padre for a very long time, and I am so glad he’s here. He’s been really good for us so far this season, and I can’t wait to see what else he does for us.

Tony’s defense has also been great. Last night, he made an excellent sliding catch in foul territory, then threw to second to double off the runner. It was great.

Ok, so right now, I am not happy with my Padres. So not happy that I’m slightly boycotting them. I refuse to listen to this junk on the radio. They’re not going to play good baseball, I’m not going to listen to it. I don’t need the depression. Sure, you should never let the score effect a good time at the ballpark, but this is getting ridiculous. I just can’t listen to it, so I won’t.

I am so thankful that interleague is almost over, but I think we’re done. I predicted before this nightmare started that if we can’t get through this, our season will be done. I mean, I don’t know if being done with interleague will solve all our problems. It doesn’t work that way. The pitching is pathetic now, and playing NL teams is not going to fix that.

We’re 16 games behind, and the Dodgers are showing no signs of slowing down. I still think that the Dodgers will have to fall apart sometime, but I don’t think my Padres could make up that distance, not with the way they’re playing right now.

Maybe being done with interleague will help them. Maybe I’m wrong. But I don’t see it happening. Not when you have terrible starting pitching, and rookies who aren’t hitting in the lineup. Not when you’re bullpen gives up tons of runs. Not this team. These Padres are doing nothing but proving what people expected of them: that they would be a terrible losing team.

And so, until these guys start getting their act together, I’m going to keep away from the radio. I don’t want to hear this PATETIC baseball. It’s not worth it.

Well, tonight we have our ace Kevin Correia pitching, so I’m allowing myself a tiny bit of hope that we might actually play well. We’ll see.