Most of us know Heath Bell’s story. He spent nine seasons with the Mets, being shipped back in forth from the major league club and Triple-A so many times that the players joked about the “Heath Bell Express”.

Heath was finally traded to the Padres along with Royce Ring in 2006. With the Padres, Heath got an opportunity to prove himself as a major-league pitcher. That he has done, spending two seasons as set-up man to Trevor Hoffman, and now taking over the closer’s role. 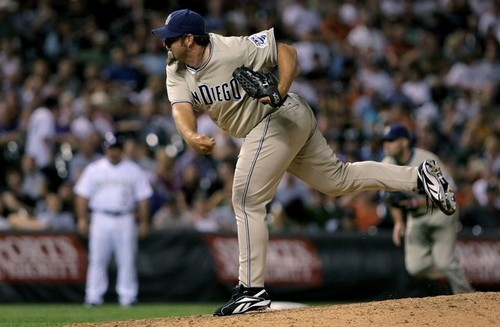 It has been well chronicled about Heath’s feelings towards the Mets. He’s mostly thankful that they traded him. But while he was with the organization, he felt that they never gave him a chance.

So I know it’s been great for him to be able to go out there and pitch against his former team, to show them what they missed out on, to show them that he really was a good pitcher. Heath saved the first game of the series, a 6-5 win, and he got so excited that he threw a pitch at the backstop. This time, he was so pumped up that he was throwing 96 MPH. But more on that later.

Jake Peavy started the game, and gave up a three-run homer to Carlos Delgado. Obviously, things weren’t looking that great. Our ace threw 44 pitches in the first inning and gave up three runs.

But my Padres don’t get put down that easy. Not these boys. In the top of the third, Henry Blanco started it all off with a walk. Rookie Everth Cabrera came up to the plate and had an extremely impressive at-bat. He was taking pitches, running the count to full, and then getting a solid single. It was great. Jake Peavy came up and laid down the perfect bunt to move over the runners for Jody Gerut.

Jody singled Blanco in. NEXT! David Eckstein came up and drove Cabrera in. Brian Giles grounded out for the second out, but then Adrian Gonzalez was intentionally walked. Chase Headley came to the plate and drove in two runs with a single. Koooooz drove in Adrian for our fifth run. Then Henry Blanco, who started the inning, ended it with a strikeout. But the damage was done. We came back from losing 3-0 to winning 5-3 in one inning! I loved how we were able to play small ball, just getting singles, moving the runners over, and driving in some guys even with two outs. This offense is so much better than last year’s!

In the fifth, Adrian walked and Chase drove him in with a double for our sixth run. It was great! Chase had four hits on the night, driving in three runs.

Jake exited after five innings, so into the bullpen. Cla Meredith and Edwin Moreno threw one scoreless inning each. Duaner Sanchez, a former Met, gave up a two-run homer to Ramon Castro, making it a one-run game.

Onto the ninth, and Heath Bell. He got two quick outs, but then it was Delgado vs. Bell, head to head. Heath wasn’t going to get this save easily. He got two called strikes to start Delgado off, then two balls. Delgado proceeded to hit four foul balls. Heath threw him a ball, and then Delgado hit another foul. Finally, finally, Heath got a called strike to save his fifth game in five chances (that leads the majors by the way). I’m almost glad I wasn’t listening to that AB ’cause it would have been so stressing!

It was an excellent game. We won the series, 2 games to 1! We are still on top of the NL West with a 7-3 record, though we are tied with the Dodgers. This team is just amazing. It’s so exciting to be winning, and to have such a great team!!

Today we are playing the Phillies, Chris Young against Cole Hamels. What a pitching matchup! It’s going to be a great game!

Too bad I don’t get to listen to it though. I’m going on a retreat in the mountains by a lake this weekend. But this time it’s going to be for leisure and fun, instead of serving. I’m really excited, and I think it’s going to be a great weekend. I will miss blogging and listening the games and stuff, but I’ll be able to catch up when I get back. Of course, feel free to leave comments letting me know about how the Padres do or any big baseball news!