Coming into last night’s game, Wade LeBlanc had had a very bad time in the majors. In the eight major league starts he had before, he had an ERA of 8.53. He also had a 16.20 ERA in two starts at Dodger Stadium. He hadn’t been that good at all in his starts with the Padres. Descent in Triple-A, but not good in the majors.

LeBlanc had, by far, the very best start he’s made in the major leagues. He threw six innings, allowing two hits, three walks, and struck out two. He was being aggressive, throwing strikes, and he threw an excellent game. I’m very pleased. Well done, Wade.

In the top of the first, we got two runners on with no outs. Everth walked and Eck singled. But Adrian struck out and Everth got caught stealing. Thankfully, Kouz was able to single in Eck to give us the lead.

In the top of the second, Oscar Salazar singled. Will Venable grounded out, sending Oscar to second. Then, craziness abounded. Nick Hundley singled, the hit going off the pitcher’s glove and to the shortstop. The shortstop threw past first, and as Oscar chugged around to score, the first baseman threw over the catcher’s head and into the stands. My goodness. The Dodgers got charged for two errors on that play, and the Padres got their second run. 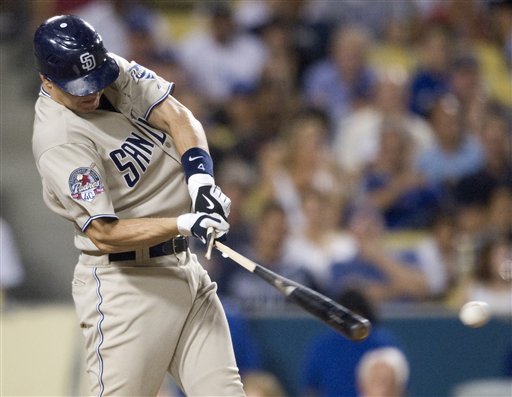 After LeBlanc left the game, Joe Thatcher and Luke Gregerson threw. Heath Bell relieved Luke with two outs in the bottom of the eighth, with the potential tying runs on board. Heath induced a fly-out to left field to get out of the inning.

In the bottom of the ninth, Heath came back to get the save. First batter he faced singled. But, he got an excellent double play started by Kouz. Heath ended the game with a called strike to the last batter. 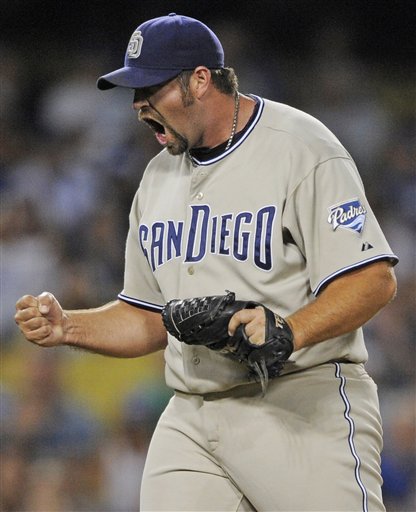 And so, we won 2-0, beating our division rivals. Sure, we’re 20 games behind them, but this time, the mouse came out on top of the cat.

Like I said the other day, we’re playing spoiler. We keep the Dodgers down, and we can determine who’s going to win this thing. Last night’s game was not easy. We only got two runs, five hits, the whole game. The Dodgers had some big threats going. All it would have taken was a single to tie the game. Thankfully, our pitching was able to keep them down, but it wasn’t easy.

There’s a ton of energy when the Padres and Dodgers meet. The crowd was 52,965!! I definitley heard some “LET’S GO PADRES!!” out there. These series are intense.

We have no right winning this series, I know. By the numbers, we’re the worst team in the NL West. The Dodgers have been in the lead almost all year. They’re a dominating club. But this Padres team has changed since the last time we met. They’re different, better. And I think they’re going to become a playoff-hopeful team’s worst nightmare.

Mat Latos will be making his last start of the year tonight against Randy Wolf. After tonight, the Padres will be shutting down Latos, since he’s had a very large work load this year. I hope he’ll be able to have a great start to finish off a great year. Go Latos!!