I had a very busy weekend, so I wasn’t able to write about the games then. As a result, I think I’m like five games behind. So I’m not going to recap each one in detail, but I will talk about some highlights and news.

I guess the most exciting thing is that we are on a six-game winning streak. We have won 13 out of our last 15, which is amazing. We started out the spring not-so-great, but we’ve really picked it up and look where we are right now: a week away from Opening Day. I can’t believe how fast this spring has gone!!! It’s amazing.

Jon Garland is going to be our Opening Day starter against the Diamondbacks in Arizona a week from tonight. He’ll be followed by Chris Young, Kevin Correia, and…we’re not exactly sure yet. But it’ll most likely be Clayton Richard and Mat Latos.

A bunch of guys got sent down the other day, and I’d like to acknowledge a few of them for their outstanding springs.

First, Matt Antonelli. Matt has been struggling a lot in the past few years, but he came out this spring and played amazingly. He hit .378 with 14 hits and eight RBIs.

If he hadn’t had this good of a spring, I think the Padres might have given up on him. But he played really, really well, and I’m super excited to see him later in the season. There’s no doubt that he’s going to be up here sometime, maybe sooner than later. I mean, Eck’s our starting second baseman, and I don’t want his job taken away because he’s an incredible baseball player, but it’s good to know that we have Matt in case Eck gets hurt or sometime. Last year, we didn’t have a backup second baseman. Now we do. If we don’t keep David Eckstein after this season, I would feel very comfortable having Matt as our starting second baseman next year.

The second guy I’d like to acknowledge is Aaron Cunningham. We got this kid in the Kevin

Kouzmanoff trade (sniff sniff), but thankfully, he’s been really, really good. We got a good deal for Kouz, that’s for sure. He did excellently this spring. Check out the numbers: 12 hits, six RBIs, eight walks, seven stolen bases, .286 average, plus he was an amazing defender out there in the outfield. I loved watching this kid because he’s young, he’s energetic, and he’s really shown that he can play this spring. I can’t wait to see him up here in the majors later in the year. I think this is the kind of guy who could become a fan-favorite up here. I really do, ’cause I love him already.

The cool thing about all the guys who were sent down, including Mark Worrell, Luis Durango, Logan Forsythe, and Dusty Ryan, is that they’re almost certainly coming back up during the season. This isn’t as much of a demotion as, hey, go down there, keep working hard, and we’ll have you back up before you know it. Logan, Luis, Matt, and Aaron have the potential to become stars with the Padres, and I think the organization has high hopes for these guys, maybe as high as the fans have. I’m really excited about all of these guys. It’s going to be sooo much fun to watch them when they’re up here.

I keeping a very open mind about this season. I know that we’re going to be good, but I’m not looking for championship. I’m just going to take one game at a time and go from there.

One player that I’m really excited about seeing for the whole season is Chase Headley. I don’t know what happened, but he’s thrived this spring. He has been on fire. I don’t want to believe that the switch back to third had anything to do with it, but maybe it did. I don’t know. He’s hitting .293 with 17 hits and 21 RBIs. He’s really been on fire, and it would be great if he could stay like this for most of the season.

By the way, my boys have 46 stolen bases so far on the spring. Isn’t that incredible? The only team anywhere close would be the Washington Nationals with 35. But man…who would have thought that the SAN DIEGO PADRES would be leading the majors in stolen bases??

Tonight we’re playing the Diamondbacks, which is a bit of a coincidence because we’re going to be playing them again a week from tonight on the bigger stage. I’m soooo excited!!! 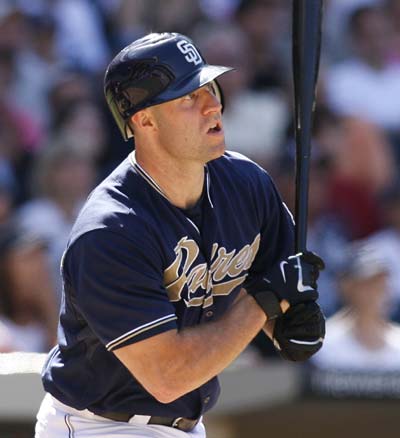 On Friday and Saturday, the Padres got pretty beat up. The pitching gave up 28 runs in those two games, plus four more on Sunday. It was really rough to watch my team get killed, but it was so bad that it was almost funny. Though it was humorous that my team was losing like 13-11 or 15-6, it’s always so much more fun when you’re the team on top. And yesterday, that’s what my Padres were. After a week of losses, they finally pulled off a win by beating up their NL West rivals, the Arizona Diamondbacks.

The pitching was very much improved from the weekend. Cha Seung Baek himself was very improved! He went three innings, allowing only one run on one hit. He walked one and struck out two. I mean, compared to how he’s been doing, this is definitely his best outing of the spring. Even in the very few innings I was able to listen to, just hearing the way the guys described his pitching, I could tell that his stuff was working much better. The guys really noticed it, and there was one pitch that Ted Leitner said was the best fastball that he’s ever seen Cha Seung throw. So, I’m pleased that he’s (hopefully) getting it together.

The rest of the pitching was pretty good. Jae Kuk Ryu had a bases loaded situation, but he induced a grounder to third for an around-the-horn double play to get out of the inning. That was great. Greg Burke, who is going to start a Padres prospect blog around here sometime, pitched a spotless inning, as in, no hits and no runs. Joe Thatcher…yeah, him again. Miraculously, he was able to pitch a scoreless inning. I have no idea how he did it, and though he allowed one hit, he had two strikeouts. He still needs to go to Single-Single-A, though. Justin Hampson, who has been one of the more solid guys this spring, allowed two runs on three hits in the seventh. I think he has a big chance to make the Opening Day roster in the bullpen. Arturo Lopez and Edwin Moreno each had scoreless innings. I am very pleased that the pitching has improved. At least it’s not every other guy giving up four runs. I am very pleased.

On the offensive side, we did fantastic. Probably the best we’ve done all spring. We had 16 hits, and though we left seven runners on base, we scored 16 runs. 16!!! Eliezer Alfonso, a catcher who will be starting the season at Triple-A, hit a three-run homer for us in the top of the second inning off of Jon Garland. Alfonso later hit an RBI double. My boy Koooooz had THREE doubles in four at-bats! Yeah, I think he’s ready to play. One of those doubles drove in a run. I am so proud of him!! Anyway, Brett Dowdy. I hate to admit it, but I have no idea who this guy is. Before this spring, I had never heard of him. I am pretty sure that he’s with Portland, or was last year. I think he was one of the guys brought into big league camp when the guys left for the WBC. So, wherever he came from, he had a good game yesterday. Double down the left field line, clearing the bases and driving in three runs. Not bad. Brian Giles, Will Venable, Drew Macias, Matt Antonelli, and Cedric Hunter each drove in a run. Brett Dowdy drove in four. Kyle Blanks drove in two. Drew Macias got a solo homer in the top of the 9th. I really like how we score runs all through the game. Three in the second, four in the third, four in the fifth, one in the sixth, and then four in the ninth. I think that was great!

I must admit, I have not been following the WBC like I should be. But I did noticed that the Padres’ big boy Adrian Gonzalez drove in six runs for Team Mexico in their win against South Africa yesterday. I’m telling you, Adrian is an incredible hitter. I know you know that, but it’s so true. That guy is incredible. I can’t wait for him to get back to the Padres and use that big bat to win some games for us!

Thank you so much to Sue of Rants, Raves, and Random Thoughts, who did some research and revealed the mystery of the unknown autographs. Our mysterious Scribblers are Matt Antonelli, Drew Macias, and Cedric Hunter. I am impressed. Those are not just your average minor leaguers. These guys are regarded pretty highly by the Padres organization. Very cool.

Today is an off-day for my Padres. It seems so strange to have another off-day, because it seems like we just had one! But tomorrow we are playing Team Korea. That’s going to be really interesting.

Have a great day, everyone, and GO PADRES!!