This was a game that kind of went over my head. I listened to the first half of the first inning, where the Padres got one run, then I decided to see if I could listen to the game and read a facinating book at the same time. Well, the book won. I actually turned off the radio and just read. By the way, if you’re into thick adventure books, you have got to check out this series by Stephen Lawhead. It’s called the King Raven Trilogy, and it is excellent. I’m working on the third book right now.

Where was I? Ah yes, the game. Well, Kevin Correia started, giving up three runs on five hits in five innings. He also walked three batters. So, it was a decent outing, but he hasn’t had a spectacular outing at all this spring. Frankie De La Cruz threw two innings, giving up one run. Greg Burke threw an inning and allowed a run. So, the pitching was average.

The hitting was average. We took a 2-0 lead, but the pitching gave it up. Five hits and six left on base, you know. AVERAGE. This roster is shaping up, though. We’re getting so close to Opening Day!

Kyle Blanks was sent to Minor League camp yesterday. The best player of the spring, he will start the season at Triple-A. But as I recall, something very much like this happened last spring. The Padres’ most prized prospect, Chase Headley, was sent to Triple-A after a stellar spring. He joined the major-league team in June. Blanks has it harder, though, since he doesn’t have a position to play on the club. He plays first base; there’s another guy named Adrian Gonzalez who has first base taken care of. But the Padres will find a place for him to play.

Guess what? Trevor’s going on the 15-day DL!! Look what the Brewers have done to him!! This is really sad because this is only the second time in his 16-year career that he’s been on the DL. He never should have left the Padres! He needs to be with the trainers who know how to take care of him, the ones who have been working with him for years! Argh. Brewers, take care of the old man. Please. The Padres need him next year!! 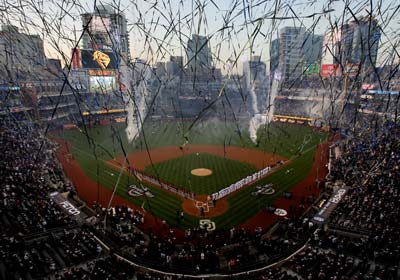 I need to get out to an Opening Day game someday. It would be so neat to be in that atmosphere, to be at the very first game of the season. I would love to see Jake pitch for the first time of the season. I think I’ve seen Jake pitch three times, and it’s so much fun to watch. He’s just getting strikeout after strikeout, and he’s not giving up anything. It would be so much fun to be out there on Opening Day. I must do it someday!!

Tonight is my brother’s eighth game. It will be very fun to watch, and let’s see if those Pirates can win their sixth game in a row!

Tonight is also a big playoff game between the San Diego State Aztecs and the Baylor Bears. Go Aztecs!

And the Padres are playing tonight against the Brewers. They should pound Milwaukee for hurting our Trevor. Well, at least Trevor won’t be pitching. Walter Silva, who will very likely be in the rotation, is pitching for the Padres.

We only have two more Cactus League games after tonight’s game! Then we have the SoCal series against the Angels on Friday and Saturday, and then Fan Day on Sunday, and Opening Day on Monday!! Very exciting!!