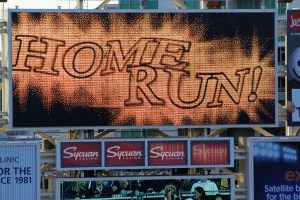 We finally did it! We got our first win of the season!

And not just by some wimpy walks with the bases loaded. No, today we were strong. We brought out our bats for real and sent those Dodgers out of town with a loss on their record. Just one, but it was enough.

Starting pitcher Clayton Richard was phenomenal. He was dealing. He threw seven innings, allowing only two hits and no earned runs (two unearned though) with no walks and three strikeouts. He deserved the win.

On the offensive side, we had 12 hits. 12! We needed that breakout after the miserable three games before it.

In the bottom of the first, we got our first lead of the season by Jesus Guzman’s single. Then Yonder Alonzo hit a sacrifice fly. It was remarkable. Your San Diego Padres had a 2-0 lead.

Things stayed pretty chill until the bottom of the third, when John Baker hit a single that score Guzman. We now had THREE runs to our name.

Then in the bottom of the fourth, Andy Parrino hit a bomb to left-center. It was massive. That gave us a 4-0 lead, and we were pretty happy. Unfortunately, we left the bases loaded in that inning.

In the top of the sixth, Matt Kemp hit a two-run homer. Boooooooo.

The bottom of the eighth was the best though. We led off the inning with three straight singles, and then Chase Headley came up to the plate. He took a swinging strike, and then sent that thing out of the ballpark. Grand slam, 100 percent. He knew it and everyone in the stadium knew it. It was gone.

So that gave us an 8-4 lead. It was truly amazing. That was Chase’s first hit of the season and he couldn’t have picked a better time to do it.

In the top of the ninth, Andre Either did hit a two-run home run, so if we hadn’t gotten that grand slam, we would have been in trouble. But thankfully, we did get it and we got the win.

It’s obviously not ideal, only winning one out of four games. But let me tell you, it’s a huge relief. We needed that win so badly and I’m so thankful that we finally got it.

Check out my Storify story on this game.