So good to see the Padres actually playing some solid baseball this past weekend. I can stay a fan for a long time (it’s been six years, yo), but it’s always so much more fun to be a fan when the team is winning.

I’m happy. The team should be happy. Hopefully we will have a great series against the Nationals.

The Padres lost their first-place lead this week. It was almost unbelievable. We’d been hanging out there ever since April 19th, and then we finally gave it up to the Dodgers. Which is really, really sad.

I thoroughly enjoyed being in first place for all that time and I refuse to give it up now. It was soo cool to see my boys up there for such a long time because everyone said that the Padres would be far far away from there, like in the NL West cellar. Thankfully, the Diamondbacks took our place down there and we were able to stay on top.

Now that run seems to be over, but like I said, we just can’t give up hope. Come on, we gave up our lead to the Dodgers. The Dodgers! We have to get it back from them ASAP!!!

Now we won our first game today, another gem by Mat Latos, so that brings us back to only half a game behind the Dodgers. If we can win our second game tonight, I think we’ll be in good shape. Then all we have to do is win the next oh, say, 60 series. (I don’t even know how many series we have left)

Latos threw an amazing game today. He went six innings, allowing two hits, two runs, one walk, and struck out eight batters. Whew. I am so in love with our pitching staff right now. They are sooo good!

Speaking of pitching, how ’bout that outing by Stephen Strasburg? I was super excited to get to watch part of that game because he’s a San Diego boy. I never did get to see him pitch when he was here, but I really really hope that someday he’ll be able to play for the hometown team. 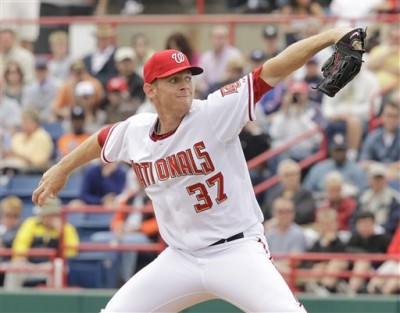 My boy Lance Zawadzki has not been doing too great in the last week. Seems like he’s only been given pinch-hitting opportunities, but he’s gotten his average up to .231. You can do it Lance! Maybe he’ll get to start tonight…

I just wanted to mention something that a couple people have been discussing in the comments of my entry a couple days ago: why do the Padres have such low attendance? Listen to what padres2050 pointed out: “Waiting to see how long a team is good, just to start going to games, is very weak. All around the league there are teams that had much worse starts than ours did, and their teams’ fans didn’t wait around, they showed up from day 1. Now I will agree all around the Majors, because of the economy, the attendance is down a bit. But not to 15K a game in most places. Our city is I believe 7th ranked in population in the country. It takes playing the Dodgers and the Cubs and having their fans come in to pack the park to sell out? That’s just sad. Other teams’ fans will travel from all over the country to Petco. Our fans won’t even come from San Diego. It must be disheartening for our players to see the empty stands or worse, to hear the visiting fans make it sound like it’s their home and not ours. I will go on record that I admire fans who come from afar when their team is not even in 1st place. I gotta respect that and wish our fans would do the same. Being a fan is not about winning or losing, it’s about supporting your team whether they are in first or last place. It’s about loyalty and showing up no matter what. Truthfully, I think a lot of San Diegans are weak in the excuses they use. It doesn’t help our reputation nationwide. We complain we don’t get enough national media attention. Why should they pay attention when the impression that’s given, with all the empty seats, is that we don’t care, ourselves? The Padres have done a lot of things, lowered ticket prices in a lot of areas, etc., they understand the economy is bad. They must really be flustered.”

I agree completely. We really have no excuse, and I really hope that the attendance will get up ASAP. We should be cheering for these boys no matter what, and even harder now that they’ve lost their first-place lead. They’ll spring back. They always do. But we need to get out there and support them already!

Looking forward to this game tonight. It’s been a really long time since we’ve had a double header. Go Jon Garland! Padres dominate.