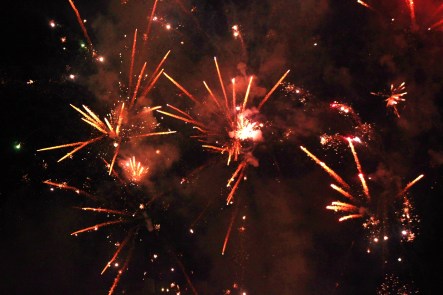 Tonight, the Padres presented Star Wars-themed fireworks after the game. But during the game, there were no fireworks. The Padres were more bland than tofu tonight.

We had a whooping total of three hits in the entire game.

But the defense was not bland. Instead, it was a little more spicy than any of us could handle.

OK, the bland vs. spicy comparison doesn’t really work when describing the defense. It was more like, the defense was so terrible that I was ready to jump off the Toyota Terrace.

Cory Luebke started off the game with a three-pitch strikeout, but things didn’t go so peachy for the rest of the game. Not even for the rest of the inning, for that matter. He ended up allowing a two-run double to get the team into a hole early, not that we would have been able to come back from anything.

Chad Billingsley, starting for the Dodgers, was brilliant. He made it all the way to the 9th inning, hit 100 pitches and got taken out of the game to very loud booing from the Padres fans. We did not appreciate what he did to us.

It was the top of the third that was the worst half inning ever. With one out, Mark Ellis doubled, Matt Kemp hit a grounder to third that should have been routine for Chase Headley, but instead he decided to throw it funny and Alonzo had issues with it at first. He went to try to get the out at home and threw that away too. Nice. Then while the next batter was at the plate, Cory threw the ball into center field. I think he was trying to catch the runner on second. Juan Rivera then hit a pop fly to right field, where three guys decided to go for the ball. All three of them missed it, of course.

It was the most miserable inning. I couldn’t believe what I was seeing. It was one thing after another. I thought I was watching a Little League game. Believe me, I remember my little brother’s games where the ball would not stop being throwed in the wrong direction. I mean, over the past few years, our defense has been the one thing that’s been more than okay. If we don’t have our pitching, offense and now defense, what do we have?

We only were given two errors, but we deserved at least six. That’s five errors in the first two games of the season. Ugh.

Luebke left after 4.2 innings with six runs and nine hits tagged onto him. But not all of them were his fault. His defense was not behind him today.

Micah Owings came in in relief and had an impressive outing. He went 3.1 innings and only allowed one hit and one walk. Andrew Cashner also threw a scoreless inning.

At least the fireworks were cool.

Check out my Storify story about this game – http://storify.com/kaitybergquist/padres-lose-again

In all the Trevor Hoffman excitement yesterday, the actual game sort of flew under the radar. But it’s worth knowing about, because it was a seriously great game.

Cory Luebke started it, and he carried a no-hitter to the fourth inning with two outs, just like he did on his outing before (on Tuesday.) The no-hitter was broken up by the Marlins’ Mike Stanton hitting a solo home run in that fourth inning.

But rewind to the bottom of the first, with leadoff hitter Will Venable starting off the game. With a count of 2-0, he hit a solo home run to right field.

An out later, Cameron Maybin walked. An out after that, Orlando Hudson singled. Then Kyle Blanks doubled in both Maybin and Hudson for a 3-0 Padres lead.

Cory and the Padres cruised through the seven innings. Other than the home run, not much happened. The Padres did leave quite a few runners on base, but we had a solid lead and we’re feeling pretty good.

In the top of the eighth, the Marlins’ John Beck hit a sacrifice fly to move Florida within one run of a tie. Heath Bell came in because there were two outs, and got the final out.

Then the top of the ninth was when the craziness started. Heath Bell got two quick outs when Mike Cameron came to the plate. And. He. Hit. A. Freaking. Home. Run. I couldn’t believe it. I could not believe that he hit a solo home run to tie to game.

I was not happy. We were literally within one out of winning that stupid game and Mike came in and stole it away from us. Garrrr.

Nick Hundley, who has been on fire since he came off the disabled list, hit a triple to lead off the inning. SOO exciting.

Then Edward Mujica, who was pitching for the Marlins, intentionally walked the next two hitters to load the bases (Logan Forsythe and Alberto Gonzalez.) We booed him, of course. I knew that it wouldn’t help him at all. Because guess who was coming to the plate? That’s right. Will Venable, the man who started off the game with a home run, was about to finish the game with another bang.

Single over the head of the right field. Nick Hundley scored. Padres win.

It was a great game. Even Heath blowing it gave us the opportunity to finish off the game with excitement. So everything turned out well in the end.

Yesterday was a great day to be a San Diego Padres fan. Thank you to the Padres organization for such a wonderful day at the ballpark.

Last night’s game was a great one for the San Diego Padres.

We had 15 hits, which is rare. But it was so much fun to watch! Nick Hundley, who recently came off the disabled list, had three hits, two triples and a double. Two triples!! It was so great.

Cory Luebke, who started the game, threw very, very well. He had a no-hitter through 3.2 innings. He ended up only giving up three hits on one run with five strikeouts. What an outing!

In relief, Chad Qualls allowed the Mets’ only other hit in the game. Luke Gregerson and Erik Hamren threw the eighth and ninth with no problems. 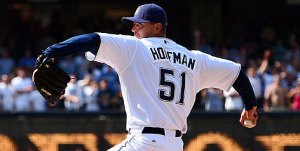 Guess what? Trevor Hoffman day is only a few days away!!!! I am sooooo excited. But I’m going to cry so bad. Just the sound of Hell’s Bells makes me freak out, so I’m pretty sure I’m going to be a mess on Sunday. But that’s okay. Trevor Hoffman is my all-time favorite Padre (besides Kevin Kouzmanoff), but more than that, he’s one of the all-time favorite Padres in San Diego. I have so much admiration and respect for Trevor, I could go on and on about how much this guy means to me.

I’m just so happy that this retirement ceremony is happening. There was a time just a few years ago where I thought Trevor and the Padres would never be on speaking terms again. Those were some bad days. But I’m so, so, thankful that we have new leaders in the front office, people who respect Trevor and all he means to San Diego, people who will give him an amazing ceremony to honor his incredible career. It’s going to be a great day to be a Padres fan.

I went to the game last night, and I am not happy with how things are looking.

We seriously can’t hit, which is a huge problem!! It was so super frustrating. First of all, we had like one hit through most of the game. We only started hitting near the end of the game, when we really needed it, but we couldn’t come up with the big hit. It was so stupid. Our guys are just not doing well right now. We tied up the game in the eighth inning, which was great, but then we loaded the bases with minimal outs and couldn’t get that stupid one hit.

And then we need to talk about Cory Luebke. I know he’s new. I know he’s a kid. But when you come into the game with a 2-2 tie in the 11th inning, you’ve gotta keep yourself together. It was great, because he got two really quick outs when he came in. Then, something awful happened.

I don’t know if it was mental or physical or physiological or what, but he completely lost it. It didn’t make any sense. Suddenly, he gave up six runs. SIX!!!! In the 11th inning!!!! In a game that we should have had in the bag, but we completely failed. Ugh. It was so awful. Cory definitely needs to figure out what went wrong there, cause that was unacceptable. Single, double, walk, single, single, three-run home run, bam. We’re dead. It was so bad. Get your act together, Cory.

But, on the positive side, starter Clayton Richard had a great game. He was on fire. I was shocked. His strikes to balls ratio was ridiculous. He threw 76 strikes to 31 balls. It was crazy. In the first few innings, he literally had like one ball to 10, 20 strikes. I kept looking at the pitcher scoreboard and laughing. He was really on his game. He went 7.2 innings, allowing two runs on five hits with four strikeouts and two walks.

Okay, so here’s the thing: Ryan Ludwick and Brad Hawpe are actually pretty good fielders. Ryan made a couple of great plays in left field and Brad did the same at first. But neither one of them can hit! Usually I’m the one who believes in all the players, no matter how they’re doing, but when Hawpe was announced in the bottom of the ninth with two runners on, even I groaned. I knew there was no way he was going to be able to help us, and when he was replaced by Jorge Cantu, I rejoiced. Even though Cantu struck out swinging.

Alberto Gonzalez, who we acquired a couple of weeks ago, has done really well for us so far. Last night he went 2-for-5 with an RBI and a triple. It was great. He tripled and went for home when the ball sort of went crazy, but got thrown out. It was a pity. We really could have used that extra run.

So, the game stunk. We had the opportunities, but we couldn’t capitalize on them. This loss was entirely our fault. We had better get things going soon. Just saying, our bats needs to start up ASAP. Like today. Like right now.

Anyways, so the reason I was at Petco yesterday was because the Padres were hosting their first annual sports and entertainment career fair. It was okay. I did learn some stuff, but there were a serious amount of suits there and since I’m not yet a high school graduate, there weren’t really many job options for me. Tom Garfinkel’s speech was pretty good though.

As I was packing up after the game ended and was super upset about the stupidity of my team’s lack of hitting, the guys from Gaslamp Ball ran into me. It was really cool to see them and chat a bit. I was pretty upset at Cory at that point, and promised quite the rant about him, which you can find at the top of this post ^

We’ve got to get today’s game. We absolutely have to. We must win win win and for goodness sakes, get some clutch hits!!!!!!