Wow, what an incredible event! I hardly know where to begin, but begin I will!

My mom, my brother and I arrived at Petco Park around one pm. 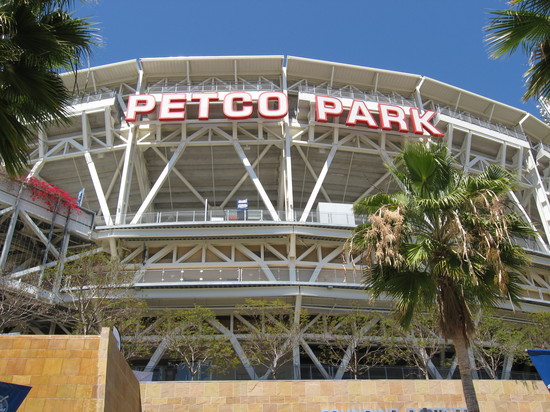 Jen soon joined us. We got in contact with Hyun Young, who had been there early. We would meet up with her later.

We ran down to the field because some players were signing near the Padres dugout. Unfortunately, the players ran off the field just as we got down there. So, we missed most of the workout. Oh well. 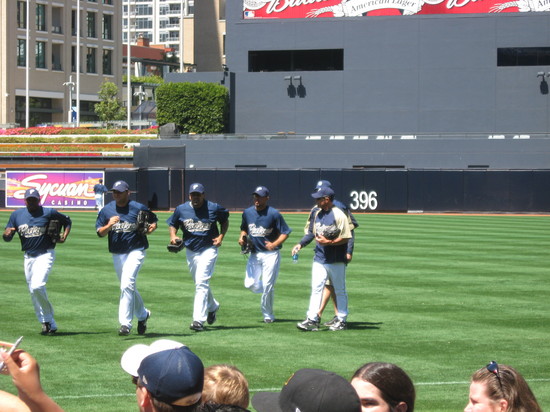 Next we went to the Jake Peavy autograph line, which was full. We decided to take a gamble and went into the overflow line. We waited for about an hour, watching the scoreboard and listening to the music that blasted through the stadium. 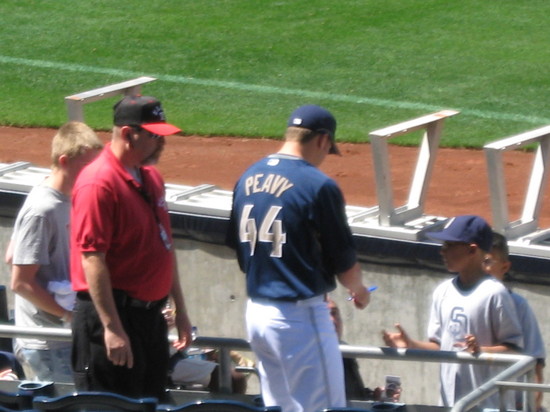 Jake made pretty good time. He got through everybody in the guaranteed section in probably forty minutes.

It wasn’t looking great for us in the overflow section though. We had certainly taken a gamble. We were only about five rows in, so we were close. But if Jake didn’t get to us, we wouldn’t have time to go anywhere else. We would either get Jake’s autograph or none at all. We took a huge risk!

It looked very unlikey. They said the first two rows of the overflow would get to go, and that was it. But Jake is an incredible man. The next two rows got to go, and ours was next. We were begging to ourselves, “Just one more, just one more!”

Well, we got it. They told us to get up, and we got to join the line. It was so cool. After going through that range of emotions, worry to disappointment to panic to joy! Very cool. We walked down the steps, watching Jake as he signed for the people ahead of us. They were moving people through very quickly. A guy would take your one item to be autographed, put it in front of Jake, you step in front of Jake as he signed, and then you were gone. It was very quick.

Jen was ahead of me, and as Jake signed her ball for her, she told him that though she is a White Sox fan, he was her new favorite Padre. As I stepping in front of Jake, I said, “We love you, Jake!” I think he said something in reply, but I couldn’t hear what he said. Oh well. 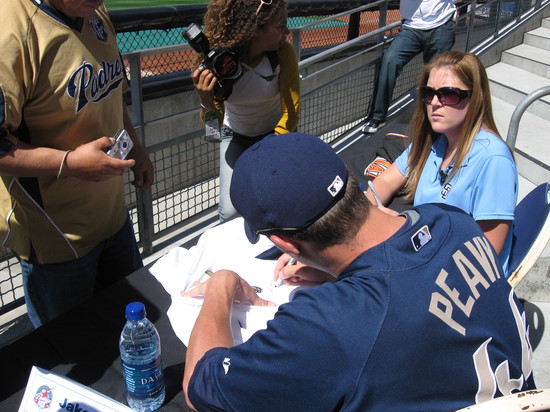 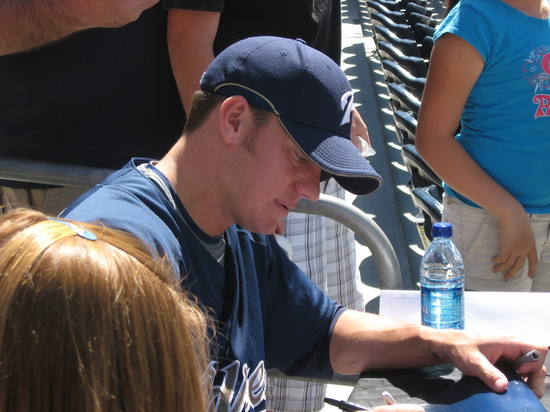 Let me rave a little about this guy. He went way above what he should have done. I knew he would sign extra for as many fans as possible. What class this country boy has! I love him. I mean, he’s starting tonight! Any other ace might have opted out of an event like this in order to prepare for the game. But this guy was incredible. He really shouldn’t have done as many autographs as he did. What a great guy! Well, at least now if he gets traded I’ll have his autograph! This guy has great class. I am very thankful for this one autograph. 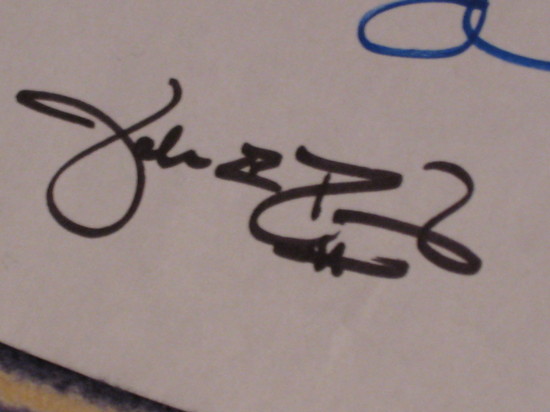 Next we went to the Padres’ garage sale, which benefitted the Padres Foundation for Children. There was a lot of cool stuff for a really good price. I got three baseballs, a coffee-tabe type book about Petco Park, a Sports Illustrated magazine with Trevor on the cover from 2002, a music sheet of the Padres’ official song, and a poster, all for under $15. I was really impressed. A lot of the stuff was from years ago, but it was pretty cool. I really enjoyed “shopping”.

After that, we went to the Cox/Channel 4 table. There was this wheel thingy that you could spin and win strange things. I got sunscreen 🙂 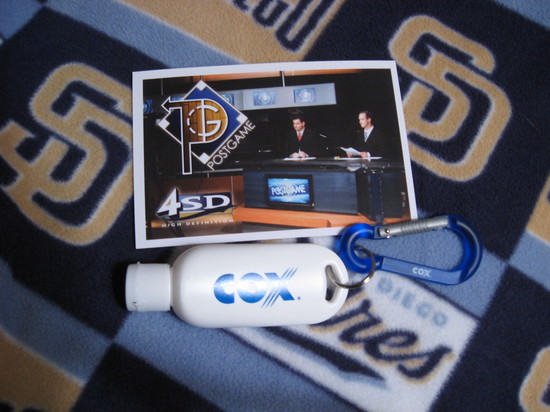 Then we finally met up with Hyun Young. We hung out for a while, talking some baseball. We were still standing near the Channel 4 table, and when we saw some of the postgame guys signing autographs. So we thought, why not?

I went up to the table first and laid a piece of blank Padres paper on the table in front of John Weisbarth.

“A piece of paper.” I replied.

So he did, asking me my name and then trying to think of something clever to write on it. “Thanks 4 watching!” was what he came up with. Isn’t that brilliant? He thought that was really good. He passed it on to his comrade Steve Quis, who signed it as well, putting a “+” between his name and John’s.

The Hyun Young gave him a piece of (Jen’s) notebook paper to sign. John told Steve that he had to come up with the witty saying this time. Steve couldn’t think of anything, so John wrote the “thanks 4 watching” again. And something else with their signatures. But Jen’s…wow. I’m going to let her tell you about that one. We laughed and laughed and laughed. 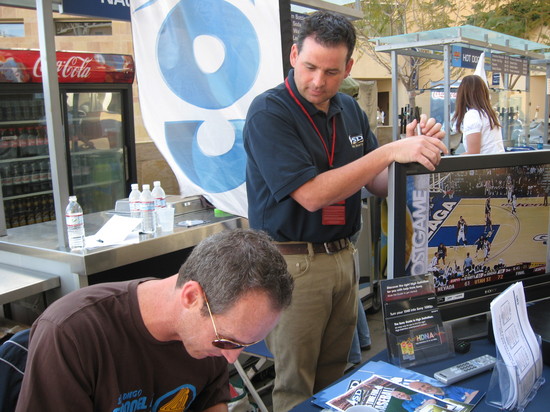 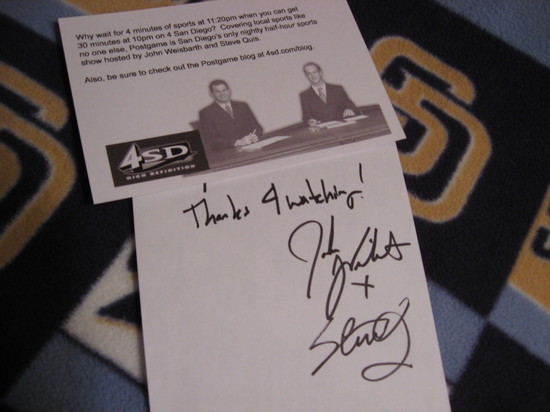 They were really funny.

Things were winding down. Hyun Young left, and then we prepared to leave as well. But before we left, I noticed a guy who I’ve heard and read about. He kind of stands out in a crowd, as he had prosthetics for arms. His name is Alex Montoya. He was born without arms or one of his legs. He published a book about his life last year, and as it happens, I’ve been reading it!

He grew up in San Diego, and his dream was to work with the Padres. Well, he’s finally working for them, and he’s at the ballpark all the time. I first heard about him when 4SD had a feature about him. It was really cool to meet him, to shake his hook, to talk to him about his book. He was a really nice guy. Meeting him was definitely a highlight of my day.

It was soooo much fun to be there at PETCO Park! We had a great time. I really enjoyed it. It was so great to get out and support my team, check out how they are doing.

I have Spring Break this week, so it’s going to be a lot of fun to concentrate on the Padres as they open the season tonight. I am so excited!!

Here are some random pictures from yesterday: 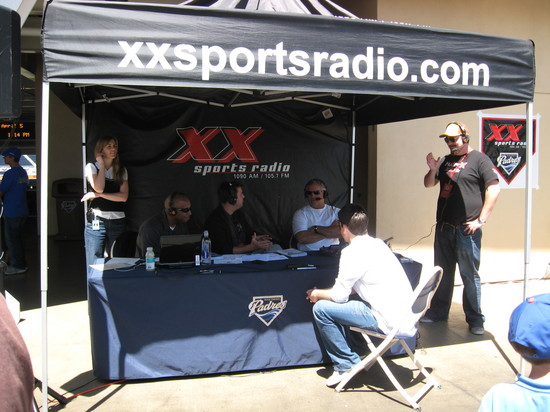 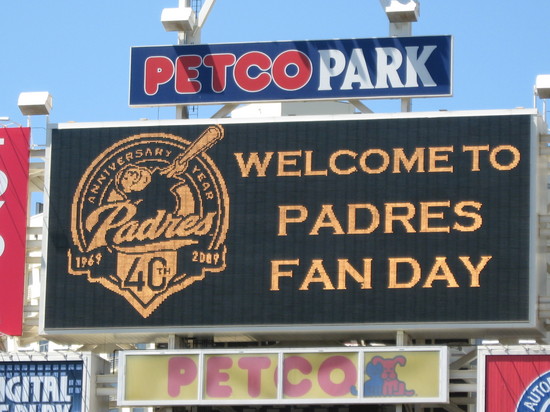 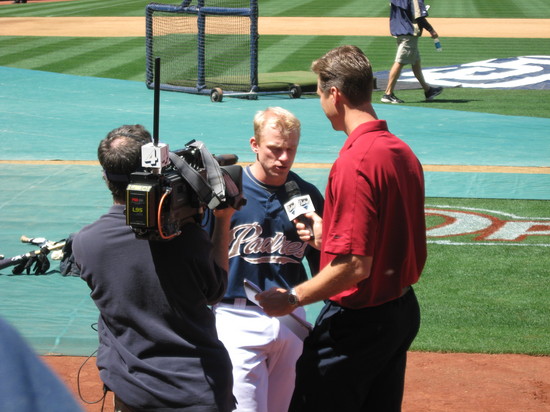 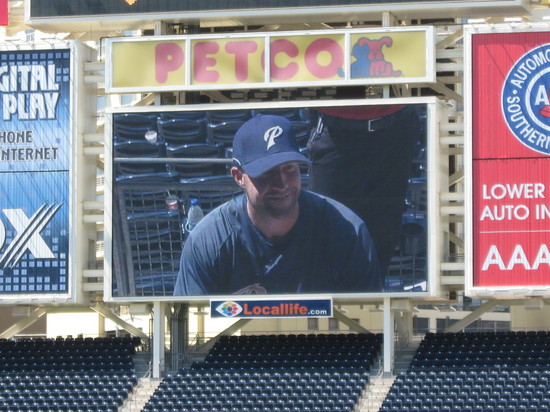 Cutest picture of Kouz ever 🙂 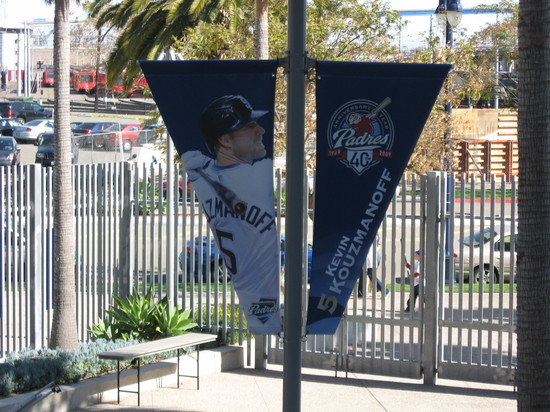 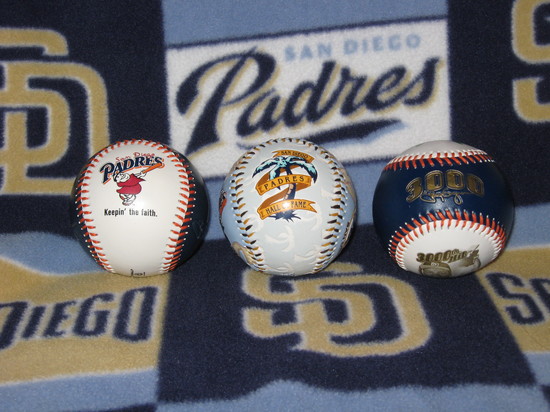 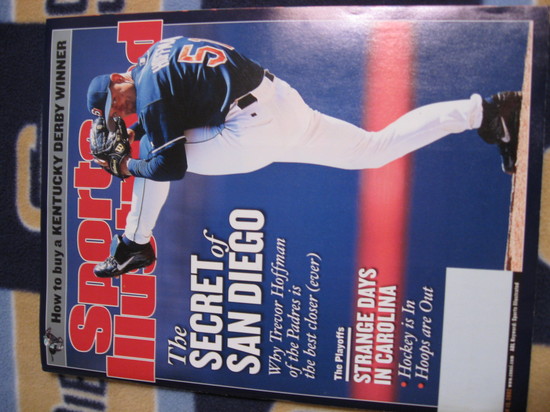 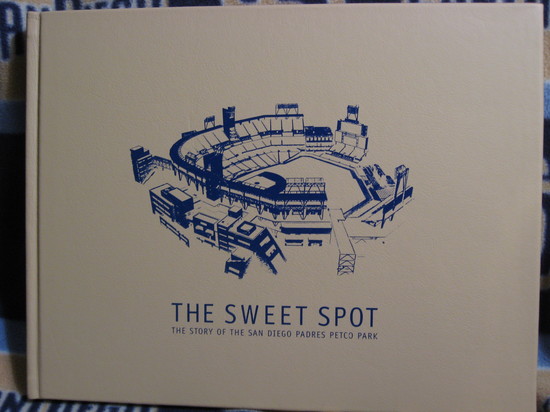 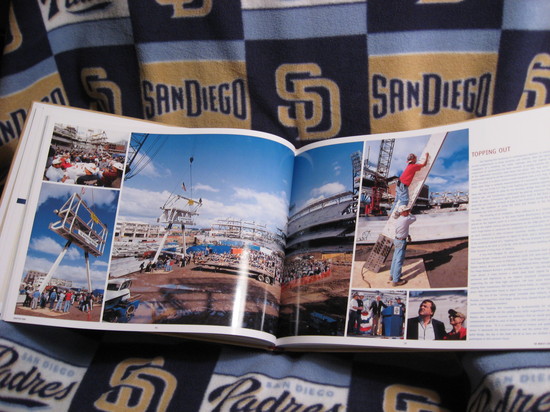 It was a really fun day, and I’m so glad I got to go. Thanks Dad and Mom!

Tonight is the opening game of the season for the Padres, Jake Peavy against Hiroki Kuroda. It’s going to be so much fun to see how my Padres do this year. I am so excited!! GO PADRES!!!