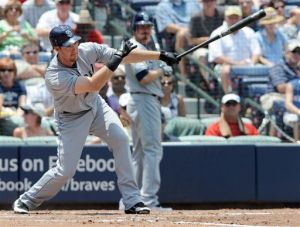 Ryan Ludwick drives in a run in the third. (AP Photo/Erik S. Lesser)

When a team is as bad as the San Diego Padres have been this season, it’s the little things that matter. Maybe you don’t hit four home runs a game, but if you’re able to play small ball and get a couple runs, maybe you’ll have a chance at winning.

The Padres started a three-game series against the Braves today, and we won 3-2, using little things. In the top of the first, Eric Patterson led off the game with a single. He stole second, got to third on an error, and scored when Ryan Ludwick grounded out.

Then in the third, we had two straight singles with one out, and another out later, Ludwick singled in our second run.

Since both the Padres and the Braves each scored a run in the first and third innings, we were scoreless for six innings. The game went into the top of the tenth, where Kyle Phillips, the catcher who came into the game in the bottom of the ninth, hit a solo homer to lead off the inning and break the tie.

Heath Bell threw the bottom of the tenth inning and got his 13th save.

I was really excited about this win, especially because we got it in extra innings and our pitching was so great. I think the weekend series was a huge booster for the team. We definitely seem to be heating up.

One thing I’m really excited about are the two young guys who were recently called up to the big leagues, Blake Tekotte and Logan Forsythe. I think it’s so cool that they’re up here and that they’re getting some good playing time. It’s unfortunate that the only reason they’re up here is because of injuries to other players, but it’s still a great opportunity for them and I hope that they’re the future of the organization.

Mat Latos is going tomorrow against Mike Minor. I really, really hope that Mat will have a solid outing and get a win.