I have a confession to make.

When the Padres were down by three in the fifth inning, I honestly didn’t think that we were going to win the game.

Oh me of little faith. The Padres proved me wrong, and I am very glad that they did.

Jon Garland started the game, but I am becoming more and more unimpressed with him. He’s really really slow and he seems to give up a lot of runs and walks. Last night, I guess you could say that he did okay. But he did get off the hook because we were able to win the game. He went five innings, allowing four hits and three runs with five walks, including the very first batter of the game and one with the bases loaded. Like, what on earth are you doing, right? 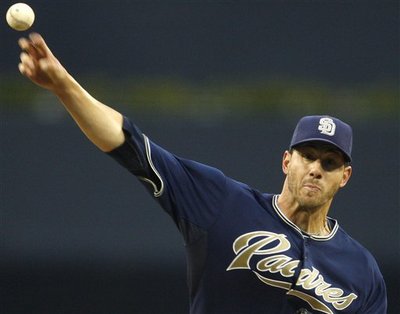 Not impressed with this guy at all. He got a no-decision last night, but he’s got a nifty little ERA of 5.40 and has two losses. Whatever happened to the guy who was going to be an inning-eater for us? I’m not liking Jon Garland. He really needs to get things together ASAP.

So, the Diamondbacks got three runs in the top of the third. I didn’t think my boys would be able to come back from that. You want to know why? I think it was because of Thursday’s game. We got behind early and never came close to the Braves. Hey, it happened on Thursday, so why would things be different a day later?

But I forgot that every day is a new game. Just because things were one way in one game doesn’t mean that they’ll be the same in the next. And I shouldn’t have given up on my boys.

When I got up this morning, I thought, “Wouldn’t it just be so funny if the Padres actually won?” A few minutes later, I looked at the front page of the sports section, and sure enough, we actually won!

I don’t know what inning it was, but Chase Headley made a really bad error at third. Since I’m going to be showering him with praises later, I think I can rip into him a little. Or at least lament the departure of Kouz.

Kouz would have made that play. It was one of those that you just groan at as it slips past the fielder. Thankfully, Kyle Blanks was able to get to it and catch the runner at second. But still. That kind of hit should not be getting past our starting third baseman. Chase has definitely been shaky at third so far. He’s already got four errors. You know how many errors Kouz had last year in the entire season? Three. That’s right. In the ENTIRE season. Sigh. I want my boy back 😦

So, strange as it seems, Chase has got a lot to live up to at San Diego’s third base. He’s in the shadow of an amazing fielder, who was honored by the Hall of Fame itself because of his stunning defense. And, I won’t approve of anything less than the caliber of Kouz at our third base. Chase is not going to get any praise from me about his defense, ’cause he’s got quite the shoes to fill. He’s still got to prove himself there.

Okay, enough ripping into Chase. I’d really like to praise Kyle Blanks now. Do you know what he did? He threw out two runners who were trying to stretch a single into a double. TWO!! That’s just so cool. And now people will be more hesitant to run wildly on our outfield. Great job, Kyle!!

Then came the bottom of the ninth. One last chance for us to come back and win the game.

Nick Hundley started it off with a walk, then was sacrificed over to second by Jerry Hairston Jr. An out later, David Eckstein, who had three hits on the night, double Nick in to tie the game. Adrian Gonzalez was intentionally walked. That brought up Chase Headley. 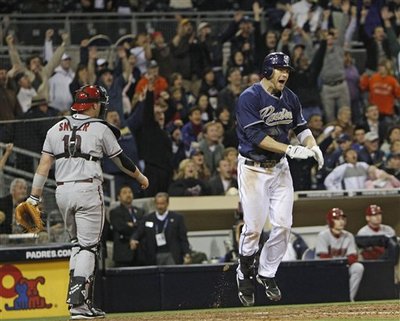 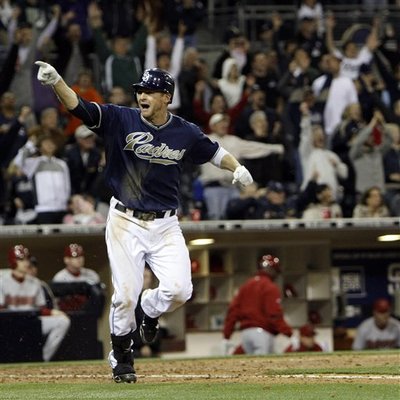 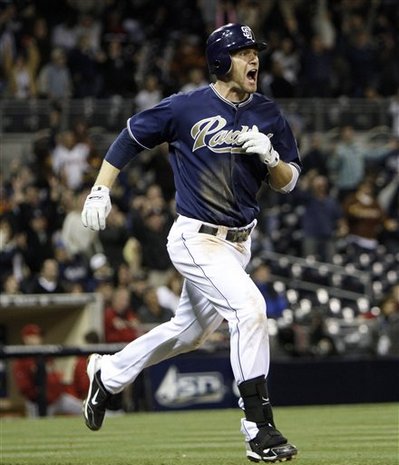 Here’s the part where I get to shower Chase with praise. I do have to say, he really redeemed himself at the end there. It was a no-doubt-about-it, and I think everyone was really happy that the game was finished right there and then. I really hope that we don’t have to have too much of this extra inning stuff this year.

Chase has really been on fire with the bat all spring. Even in Spring Training he was doing great. I’m very glad to see that it’s carried over to the regular season. So far he’s batting a cool .381 with 16 hits. He’s definitely looking great at the plate, and I’m so thrilled at how well he’s doing. I still want Kouz though.

Well, how ’bout my boys? They fought back last night after being shut down for most of the game. They were able to pull off a huge win. Our record is now 4-6, but it’s early in the season. We’ve got a long way to go, starting tonight against the Diamondbacks.