Last night the Padres wrapped up their four game series with the Pirates by sending Wade LeBlanc to the mound against Daniel McCutchen.

Both teams had not hit a home run for the whole series, but that changed when Adrian Gonzalez came up in the top of the first. With a runner on, he hit his 39th homer of the season to give the Padres a 2-0 lead. With every home run that he hits, Adrian makes a new career high. I definitely think he’s going to have at least 40 this year. Wow. 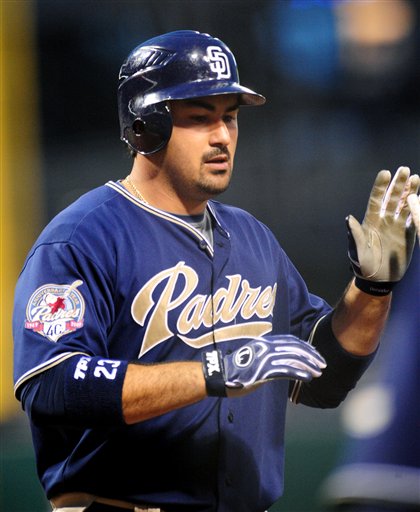 The Pirates have been worthy opponents this weekend. It was surprising, but it was pretty cool. They’ve got a lot of great young players right now, and maybe the Pirates will be a good team soon. Last night, they cut our lead in half right away on a solo homer by Garrett Jones in the bottom of the first.

Wade LeBlanc threw very well. He only went five innings, but he only allowed one run on five hits. He walked three and struck out five. He was very solid, especially compared to earlier in the year!! YAY WADE!!

The Padres had a great eigth inning. Chase Headley led it off with a solo homer. Later in the inning, Nick Hundley hit a two-run homer to give us a 6-2 lead.

Unfortunately, the Pirates came right back in the bottom of the inning, getting three runs off Luke Gregerson, who has been so solid lately!! I guess that’s just baseball.

So, we were still clinging to our 6-5 lead going into the bottom of the ninth. Heath Bell came in. And you know what happens when Heath has only a one-run lead. Yep, he gives it up. He got the bases loaded with no outs! Thankfully, he only allowed one run to tie.

We went to extra innings. Neither team got anything in the tenth, but the Padres got plenty in the 11th, that’s for sure.

After a pitching change, Nick sac-flied in one, and T. Gwynn singed in our 11th run of the game.

Adam Russell took the bottom of the inning, and we won 11-6!! It was such an amazing game. The Pirates were really in it, but we took three out of four. Oh yeah!

Chase Headley had an incredible night. He had five hits, all from the left side, and drove in two runs.

What a great series for the Padres. Now I think we’re ready to go play in the freezing cold Colorado for three games!!

As you know, Kouz has been out for quite a while with the calf problem. He was hoping to be back in last night, but something came up. I’ll let the clip in the Union Tribune tell the story:

Kouzmanoff, who was hoping to be able to return to the lineup Tuesday with a sufficiently recovered strain of his left calf, was more embarrassed than pained to report his latest injury. Evidently, he hurt himself when going back to sit in the chair in front of his locker at PNC Park, but the chair wasn’t there and he went straight to the floor on his backside.

Black said he thinks the tweaked back is not serious enough to keep Kouzmanoff from playing in Colorado.

Oh my goodness, I laughed so hard when I read this!! That’s just hilarious. At first I was like, oh no, not his back!! But then I realized that probably isn’t the chronic back problem that he has. Man, soooo funny!! Kouz is amazing 🙂

Yeah, so the Padres are ready to go play spoiler in Colorado. But it’s going to be soooo cold. I feel so bad for all the guys who have to play in weather like that! Well, hopefully they will be able to keep hot 🙂