The Padres lost the series to the Braves the other day, but last night they went out with a new mentality against a new team, and they played a great game.

BUT before the game even started, there were a few interesting moves from the Padres’ front office. First, Chad Gaudin was traded to the Yankees for a player to be named later or cash considerations. I think this is really funny. There’s a article about the trade saying that adding Gaudin will give the Yankees depth. HA! Chad has been terrible all year!! I don’t think a little change of scenery is going to change that. But you never know, he might really help the Yankees out. HAHAHAHAHAHA!!! Goodbye, Chad, and good riddance.

Next, the Padres extended Bud Black’s contract for the 2010 season. YAY!! Plus, there’s an option for 2011. This is Buddy’s third season as the Padres’ manager, and I think he’s done an amazing job. He’s done his best with the pieces he’s been given, and if we can give him the right pieces, he can do great things with them. I don’t blame the manager at all for the Padres’ recent misfortunes. It’s not his fault at all. Congrats, Buddy!!

Now, on to the game. Clayton Richard made his second start as a Padre, and he did very well once again. He threw 5.2 innings, allowing three runs, five hits, four walks, and stuck out five. BUT he didn’t allow any runs until the sixth, which is where he ran into some trouble. He allowed two walks, two singles, and a run-scoring-double-play before leaving the game. He got his first win with the Padres! Good job, Clayton.

And now, the offensive side. Oh man, this is some good stuff 🙂 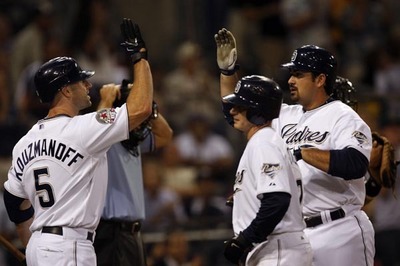 But the Padres are not done in the third, oh no. An out later, Will Venable walks, Chase Headley walks, Henry Blanco singles, and Everth reaches on a error and a run scores. Then, Clayton Richard, of all people, came up and singled in a run. It wasn’t a cheap single, either. Now that’s called helping your own cause!!

Fifth inning. Chase Headley walks, and Blanco drives him in with a single. YAY!!

Then the Mets get their three, but no one’s really worried. At least, I wasn’t.

The bullpen was amazing, as always. Luke Gregerson went 1.1 scoreless innings, Mike Adams went one, and Edward Mujica went one with two strikeouts.

In the bottom of the seventh, we went single, single, single to load the bases. T. Gwynn was then walked to give us the 8-3 lead.

So, we won the first game of the four-game series against the Mets, who are not doing well at all. It was a really great game for us.

Henry Blanco had three hits. Kouz had two. Adrian drove in three runs. The bullpen was solid, and we hit very well.

Just a great, great game. These boys have been playing so well lately!! 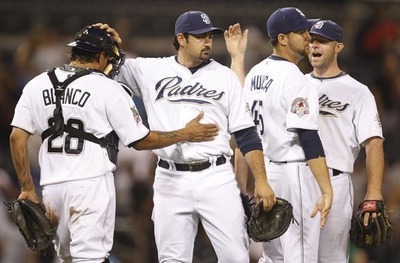 Tonight is Kevin Correia against Oliver Perez. Correia had a rough ending to his last outing on Sunday. Hopefully he will be a lot better today.