I’m blaming this one on Roy Oswalt. 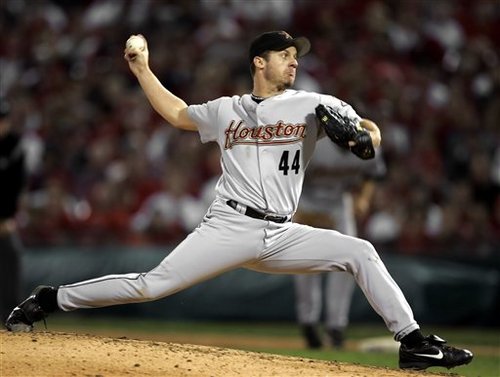 I bet Jake Peavy was going crazy in the dugout. Sitting there on the bench with his ankle in a cast, he was probably itching to be out there, knowing that he should be the one on the mound pitching against his buddy. He must have been ragging on Roy all night after the game over the phone, but what Oswalt did to the Padres was no laughing matter. It was amazing.

Roy pitched the whole game, allowing two hits and one run. That run came in on a wild pitch. That just goes to show how good he was. Man, TWO hits?? Goodness. We were utterly shut down. Roy had a excellent outing.

On the Padres side, Josh Geer wasn’t bad, but he wasn’t good enough. He threw seven innings, allowing three runs on seven hits. He didn’t walk a batter though, which was great.

Greg Burke and Cla Meredith each threw a scoreless inning.

But the game ended with a 3-1 Astros score. It should be said, though, that the Padres hit some balls really well, but were robbed by some great defense.

And so, we lost. We are now 15 games behind the Dodgers, by the way. We gained a couple games over the weekend, but those Dodgers keep winning and winning. And watch out – the Manny is coming back this weekend against the Padres. I think we may have a sold-out weekend…

Just because you wanted to know, Kouz is slightly growing out his beard right now and IT LOOKS AMAZING!!!  AHHHHH!! I love it when he does that. He doesn’t look that great clean-shaven. He looks so great with a beard!! But of course, he looks great all the time 😀

Well, Josh Banks is going to start against Mike Hampton. Banks hasn’t started for us a while, but I’m pretty sure he started last year. I’m not sure how well he did, but he must have had some decent outings. It will be very interesting to see how he does.