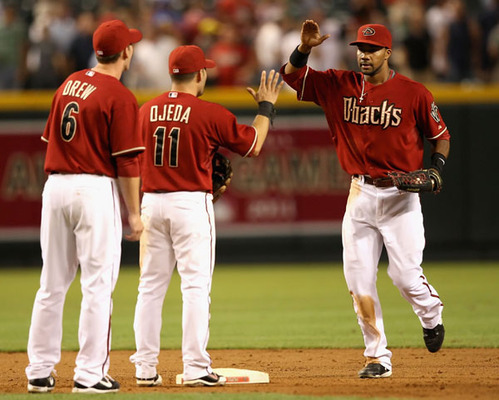 That’s how I would describe last night’s game.

Disappointing that Adrian Gonzalez was sick with the flu.

Disappointing that Kevin Correia gave up six runs in 5.2 innings.

Disappointing that we left the tying and winning runs on base in the last two innings.

Disappointing that we didn’t have enough to win our 11th game in a row.

We were close, but thus ends the streak.

It was a good game, overall. Kevin Correia was good for the first four innings, but he gave up two runs in the fifth and four in the sixth.

We were completely held down by Arizona starter Max Scherzer. I’m telling you, this kid is good. He’s got some incredible stuff, and he was really fooling us. I mean, he got 10 strikeouts, and most of them were of our guys swinging at pitches in the dirt, high, or outside. He was very good.

In the eighth, the Padres started rallying. Well what do you know…

Chris Burke homered to start the inning. Tony Gwynn and David Eckstein singled, and Scott Hairston walked. The next batter was Kevin Kouzmanoff, who was promptly hit to drive in a run. Poor guy.

Chase Headley singled to drive in another run. While Drew Macias was batting, the pitcher threw a wild pitch and another run scored. Macias was then walked, and the sick Adrian Gonzalez came to the plate as a pitch-hitter.

Adrian came down with flu-like symptoms the night before the game, and was not able to play at the beginning of the game. But later on, he was starting to feel better, so he took some swings in the cage and told Buddy that he was available to pinch-hit.

The opportunity came, and there’s no one Padres fans would rather have out there than Adrian Gonzalez. And he just missed it. He hit it high and long to right field, but it was an out. ARGHHHHH!!! He was so close, but that was the last out of the inning.

In the ninth, we rallied again. Tony Gwynn and Brian Giles singled. Then David Eckstein, the poor guy, got hit to load the bases. But Scott Hairston grounded into a double play. Though we scored a run, that really killed us. ARGH!!!!!!!!!!!!!

Kouz had a seven-pitch at-bat. One of the foul balls that he hit was heartbreaking. If it had been fair, it would have tied the game. But it wasn’t good enough. ARGHHHHH!!!!!

He finally flew deep to right center field. I have seen so many balls fall into that hole in the past two games, but Young was able to make a spectacular catch to end the game. That should have fallen in. That should have scored the tying run and put the go-ahead run at second. Instead, it sealed our first loss since May 14th.

This is so much fun. We’re second in the NL West right now. We’re 8.5 games behind, but we’re in second place. Haha. I know we can do this. This team is so good right now!

Tonight Jake Peavy is starting. Automatic win. Well, not quite, but you feel REALLY good having Jake go out there in the rubber game. If we can get a few hits and a few runs to support Jake, we’re going to get the win. Simple as that.

Oh yeah – Billy Buckner is starting for the Diamondbacks. Have fun with that.