Before I can get to yesteday, I have to start with the day before. After all, yesterday wouldn’t have as much meaning without the day before, Saturday the 16th.

Started Josh Geer lasted only 5 2.3 innings, giving up five runs. But that was it for the Reds’ scoring. Joe Thatcher (miraculously), Greg Burke, Cla Meredith, Heath Bell, Edward Mujica, Luke Gregerson, and Luis Perdomo held the Reds to three hits for the rest of the game.

On the offensive side, we started things out with a Brian Giles home run. Later in the game, Edgar Gonzalez hit a solo homer, and we got two runs in the bottom of the eighth to tie the game. Jody Gerut had an RBI ground ball, and then with the bases loaded, Drew Macias walked to drive in the tying run.

And so the game went on…and on…and on. We left the bases loaded in the tenth; the umpire’s strike zone was not good, and he called a strike on a pitch that was clearly a ball with a full count and the bases loaded. That was the third out and thus send the game even farther.

I later found out that it was a Nick Hundley walk-off homer that finally ended the game in the 16th. Nick had caught all 16 innings, and I bet he was ready to be done.

Luke Gregerson and Luis Perdomo each threw three innings, which was huge. They were both very solid.

Sure, the Padres left 17 runners on, but the bullpen was fantastic, and we finally got the win.

I knew that my boys were going to be tired. Of course, they just had to play 16 innings right before a day game! I knew that Jake was going to have to give us a solid outing to rest the bullpen. And I really really hoped that Kouz would be playing.

We got to the ballpark around 12:15. I led the way to our amazing section down the left field line. Once we got settled a bit, we got up again to get our 5 for $5. The line wasn’t that bad, and there’s no tax, so it is literally $5. Unfortunately, I have a hard time enjoying food at the ballpark. I’m usually too excited to really concentrate on my food. So, I’m pretty sure the hot dog was good. Just wish I could have savored it more… the chocolate chunk cookie was really really good. And the lemonade lasted me the entire game, so though I didn’t eat the popcorn (my sister did) or the peanuts (none of us did), I think it was definitely worth the $5.

Once I was finished snarfing my food, I wanted to go down closer to the field. There were some Padres streching near their dugout, and once we started walking over there, a few guys were signing autographs. They were David Eckstein and Edgar Gonzalez!

These are for Hyun Young 🙂 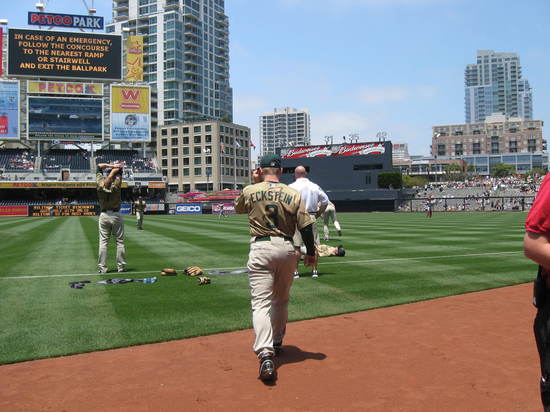 They did not sign for very long, and I wasn’t able to get anything. We had to go back to our seats for the start of the game.

It was an excellent game. I am so glad I got to see it!

Jake was good. Chris Dickerson doubled to start the game, but then Jerry Hairston bunted and Jake fielded and threw to third. He got the lead runner, which was great!

In the bottom of the inning, Drew Macias walked and Edgar Gonzalez got hit-by-pitch.

Two outs later, Kouz hit a single. But his bat broke, so there was a collective gasp. When we realized that it got through and drove in a run, the cheers broke out. That was kind of funny. Next Jody Gerut hit a single to drive in our second run.

Jake only allowed four hits in the entire game. The only run he gave up was a solo homer to Chris Dickerson.

And yes, I did say entire game.

In the bottom of the eighth, my baby Kouz came to the plate with two hits already under his belt. I never felt like our two-run lead was ever in danger; Jake was in complete control. But it was nice to get the insurance run. Kouz hit a huge homer to right field, and I was soooo happy 🙂 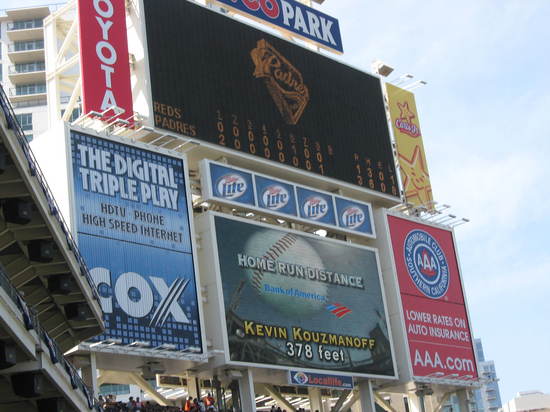 That was all for Bronson Arroyo, who threw a great game. We only got three runs and six hits off him. It was a lot of fun to watch him. He’s got that crazy delivery and the wacko hair, and it was so much fun to “cheer” for him. I was mostly saying, “Great job, Bronson, you just walked a guy!” Stuff like that. It annoyed my sister, but I enjoyed it. I congratulated him on that great game as he walked off the field. He gave us a chance to win!! 🙂 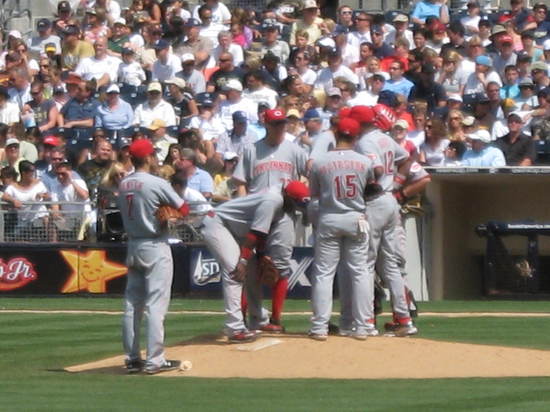 The top of the ninth was one of the best parts of the whole game. Jake came out, once again to try to finish it out.

It was so cool! Jake got the first two batters out quickly, but then he ran into a little trouble.

On the third batter he faced in the inning (Jerry Hairston), he got a called strike, and then Hairston fouled two balls. Jake threw a ball, and the crowd got on their feet in anticipation of a third strike. It was incredible. Everyone was standing and cheering, and chanting “PEA-VY, PEA-VY, PEA-VY!!” It was so cool!!

And then…Hairston hit a single. Argh. Buddy Black comes out, and when Buddy comes out, that means that the pitcher is done.

But then, Buddy walked back to the dugout, and Jake was still on the mound! The crowd erupted, ready to stand by Jake for one more batter. 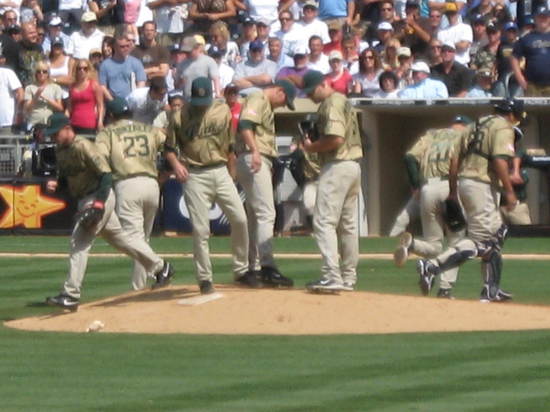 It was an intense last batter in Jay Bruce. Jake got two called strikes, then three fouls. And finally, a swinging strike! 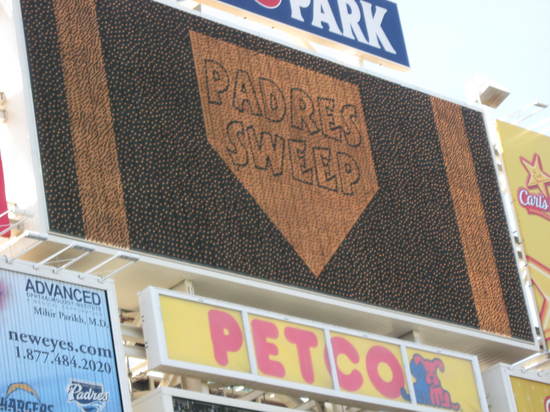 Oh man, it was such a fun game! And yes, we did kind of, ahem, move to closer seats that were not our own. It was OK, though, because they were the same price.

So, Jake threw nine innings, allowing four hits and one run and striking out eight. It was a masterful performance, so much fun to watch! The game only took two hours and 14 minutes, and the crowd was 21,123. Jake got the win and Bronson got the loss.

Here’s a funny story: the people in the section to our right were trying to start the wave, but it got stuck at the Western Metal Supply building. It never works with those people up there; they’re too rich to care. So, some of the kids in our section tried to start it, going the other way. But the people who were trying to get it going over there were apparently done with trying. So when it faded out, one of the kids yelled, “You’re supposed to raise your hands!!” A bunch of people in our section burst out laughing.

Now, I’m sure you’ve noticed a drastic absence of Kouz pictures. Don’t worry, they’re coming. I took about 300-330 pitctures at the game, and there’s probably 150-200 of Kouz. No joke. He was right there, and I just loved taking a ton of pictures of him. I also took a lot of Jake, and some of Arroyo. But mostly Kouz and Jake 🙂

Thing was, Kouz was often playing right in my line of Jake, so there’s a lot of Jake and Kouz together. Hehehe. Here’s some of my favorites (it’s going to be really hard to pick some out of the vast choices!!):

Love this one. Kouz is like, hello, where’s my stuff? 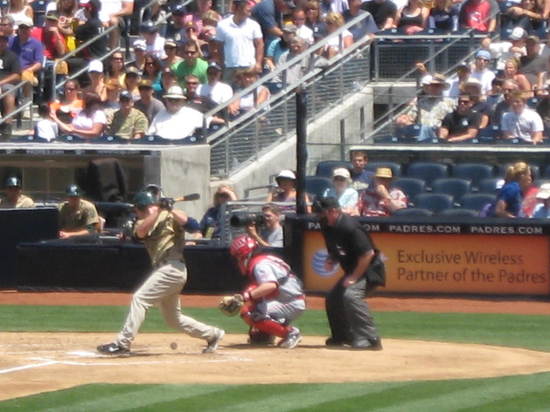 Whhhhy is he swinging at a pitch in the dirt??

Tribute to the military in the fourth (?) inning. Everyone stood and clapped for like, five minutes. It was really neat. 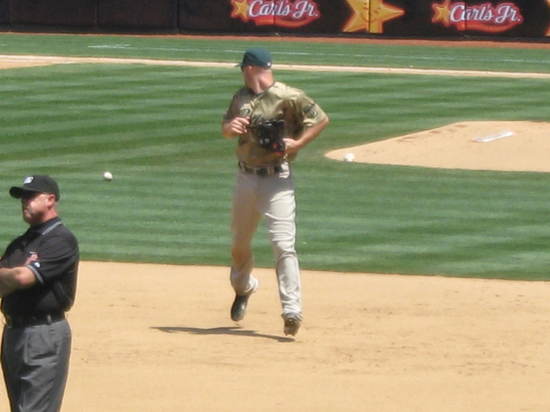 Notice Kouz in the dugout. He apparently isn’t too happy about grounding out. My poor baby 😦 But he did get three hits, and that’s all because I was there. Of course.

Glenn Hoffman clearly not in his box, thus blocking my view of home plate.

Eck came in later in the game. 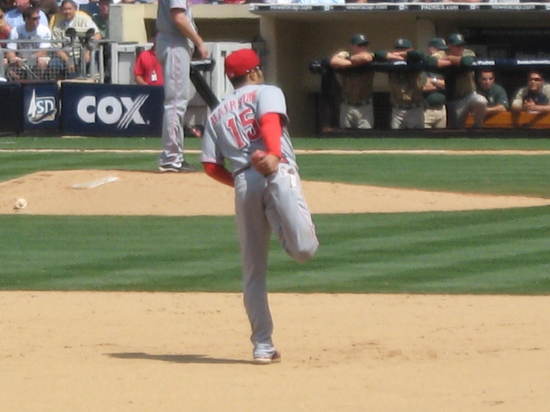 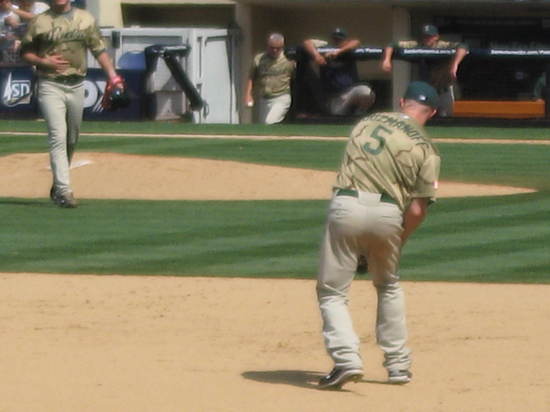 It was such a fun afternoon, and it is so amazing that we swept the Reds! This team is changed. Today we have a much needed off-day, but we’ll be getting back into it tomorrow night against the Giants!