After a closed-door meeting on Thursday, where Buddy Black got a little heated, and some roster moves before the game, the Padres went out at home in front of a big crowd and got the job done.

Kevin Correia started, with his 0-3 record, and threw seven solid innings. He credits his vastly improved performance to pitching coach Darren Balsley, who helped him tweak his delivery. He allowed three runs, but two were because Brian Giles let a ball get out of his glove. The third was a home run to Joey Votto. Correia only walked two batters, and both were intentional. He was good, and definitely deserved the win. He was the first starter to win a game for 26 games.

Luke Gregerson threw 0.2 solid inning, and Heath Bell got a four-out save. Of course, he made it interesting in the ninth, allowing a hit. But he finished it with a strikeout, saving the Padres’ first win since May 7th.

Adrian Gonzalez hit a solo homer in the first inning, giving him five games in a row that’s hit a home run.

My boy Kouz hit a double to drive in our second run in the 6th. That guy is so beautiful.

The seventh was the big inning for us. Chris Burke hit a single, followed by a Drew Macias groundout that sent Burke to second. Brian Giles then singled to put Burke on second. Then David Eckstein came up to the plate. Hyun Young, you’ve got a great guy here 🙂 He singled to drive in the tying run.

After a pitching change, Scott Hairston came to the plate and hit the first pitch right past his brother at third. The Padres got the go-ahead run!

Jody Gerut flew out to drive in one more, and the rest is history.

It’s so crazy when we play the Reds because there’s two Hairstons and two A.Gonzalezs! 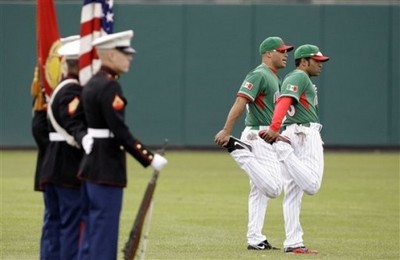 The Hairstons look so similar, it’s crazy! Seriously, I’ve even noticed that they have similar batting stances! I saw Jerry in one the video highlights from last night’s game…wow.

It was an incredible game. Feels so great to have a win!

After the game, Buddy called all the players into the clubhouse for a bit of a ceremony. First, he presented everyone with their cell phones, which had been taken away from them on Wednesday.

Brian Giles fell to the ground, kissing his Blackberry. “Now I can finally call my mommy!”

Kouz grabbed his phone and tossed it into his locker.

Jake Peavy quickly switched on his iPhone, easily the most expensive phone of the bunch, and looked shocked as his phone beeped with every new message coming in. “Only 197 missed calls and 456 texts?”

Scott Hairston immediately called his brother in the other clubhouse. “You should have yourself when you were trying to catch that single I hit right past you! HAHAHAHAHA!! You didn’t have a chance, bro!! HEHEHE, you were spread out flat on the ground…”

Burke is in the majors for the first time. Thatcher…well, if you have read any of my stuff from last year or Spring Training, you know that I cannot stand him. The guy pitches really well in Triple-A, but whenever he gets up here, he falls apart. Wilson is our new shortstop.

“Now, boys,” Jake started,”We’re expectin’ that ya’ll will throw a lotta strikes and win us some ball games, okey dokey?”

Joe put his thumbs up. “Great. Will do!”

Jody Gerut glared at them. “You’d better. You have no idea how annoying it is for an outfielder to have to watch a pitcher walk guy after guy after guy.”

Everth Cabrera, with his hand in a cast, Luis Rodriguez, limping on crutches, and Chris Burke, perfectly healthy, stared at Josh.

“So, you’re the fourth shortstop this year, eh?” Luis said.

“A word of advice,” Everth said, “Don’t punch a storage bin if you get frustrated.”

David Eckstein walked over. “Hey, so you’re the fourth shortstop I have to work with this year!”

Kouz walked over, looking perplexed. “Guys, I need some help. Do you think I should shave?”

Chris looked at his face closely. “Kouz, you barely have a shadow!”

Chase nodded. “And Kouz, Kaybee’s coming to the game this Sunday, and you know how much she loves it when you’ve got a dark shadow.”

Kouz nodded, flipping out his mirror and gazing at himself. “That’s true. I wouldn’t want to disappoint Kaybee! She might say something mean about me in her blog!”

All the guys agreed. “Definitely wouldn’t want to do that!”

Tonight is Josh Geer against Volquez. I’m really excited. I think this team can get something done tonight!

As you all know, I’m going to the game tomorrow! I am soooo excited!! It’s going to be soooo much fun. I’ll have a huge report up on Monday morning. It’s going to be amazing to get out there and watch some Padres baseball, Peavy vs. Arroyo!! I can’t wait!!

Well, today I’m going to watch two of my brothers’ baseball games. It’s going to be a lot of fun. Never can have too much baseball!