Jake Peavy started the game, giving up six runs in six innings on seven hits with three walks and three strikeouts. It was not pretty. We all expected Jake to be dominating, but from the beginning of the game, he didn’t really have it on. The big blow was a grand slam hit by Edgar Renteria in the fourth. That was bad.

It’s really too bad that Jake wasn’t able to get it on. That grand slam was the first he’s given up in his career, a span of 1,284 1/3 innings. I feel really bad for him, ’cause I know he’s really upset at himself for not performing as he should be. Hopefully he will be able to get locked in soon!

Our offense wasn’t the greatest. Matt Cain shut us down pretty well. We got a run in the first on a Brian Giles single. In the third, there was a strange play. Adrian Gonzalez and Chase Headley were on base when Kouz hit a booming double to deep right-center field. Adrian was being cautious, but Chase could see that the ball wasn’t going to get caught. As a result, they were literally on each other’s heels. Adrian slid into the plate, the ball came into the catcher, and Chase leaped over the catcher, getting himself tagged out. The umpire pointed to Chase, signalling him out, the pointed to Adrian, who had scrambled back and touched the plate. He was safe. It was bizarre! I’ve never seen anything like it. Kouz ended up at third, but was stranded there.

The Giants got two runs off of Luis Perdomo, who threw 1.2 innings. Frankie De La Cruz threw one pitch to get out of the eighth.

It was a pretty sad game. We thought our ace would be able to take care of those Giants, but he wasn’t. We weren’t able to score runs when we had the chances. Frustrating…that’s what I would call it. But today is a new day.

It’s a 12:45 pm game, which is one of the most strange starting times I’ve seen. Chris Young will be pitching against Barry Zito. What a matchup! This will hopefully be a great game. 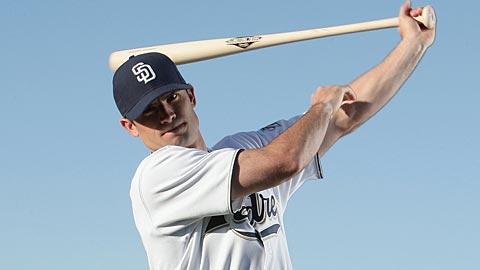 So in a way, the Mariners were just taking care of him until we found a spot for him. I think it’s great that he’s back with the Padres. He was with the team for most of Spring Training, so he already knows all the guys. Plus, he’s been playing in the NL West with the Diamondbacks for a few years. Or year.

Anyways, I hope we have a really great game today!!