Well. Let’s just say that the players were anxious to get back to San Diego, so they weren’t fully concentrated on the game. We lost to the Mariners 18-3. Yeah. Chris Young threw 3.2 innings and gave up nine runs on nine hits with four walks. Not very good, but of course he was thinking about getting back to his wife and daughter. Scott Hairston hit a homer, though.

Last night, some of the Padres played their Double-A team. The Missions came out on top 7-3. It was not the best game for the Padres, but Kouz had two hits!!

I don’t think I’m going to have the time to blog this weekend, which means that my next entry will be a report on the Fan Day! As you all know, I super excited along with Hyun Young and Jen. I am really excited about getting to go downtown.

I am pretty much obsessed with downtown San Diego. I love just going anywhere near it. I love even going down the highway towards it! We went to a party in La Jolla last week, and we went part of the way that we go downtown. I was pretty excited! Kind of weird, I know. But I LOVE downtown!

I’m sure that the majority of my love for downtown San Diego is because of this:

I LOVE PETCO PARK!!! That place is my favorite place to be. I absolutely love this ballpark. It’s so beautiful! And it’s in downtown San Diego. I live about 45 minutes from downtown, so I’m not used to all the buildings. But I love it! I love how crowded, how busy it is. I love the towering buildings. 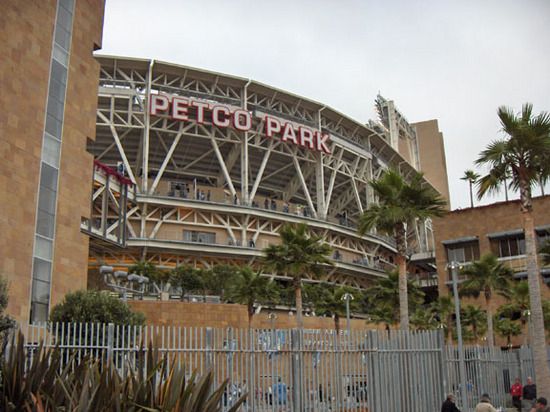 (Hyun Young and Jen – just FYI we’re going to be meeting at these gates!)

I am so obsessed with downtown San Diego. Like I said, I love just going anywhere near it. And on Sunday, I have the extreme privilege of going to the place that I dream about: the gorgeous Petco Park. I haven’t been there in about seven months. I miss that place, and I am so excited that I get to go to Petco Park. It’s going to be so much fun just to be there! I’m going to take so many pictures it won’t be funny. Thankfully, I have room for 1000 pictures on my camera 🙂

I was born in a hospital near downtown San Diego, so I think that’s where part of my extreme love and loyalty for the city comes. I loooooooove San Diego!!!!

This is my home. This is where I was born, where my loyalties lie. I love San Diego!

Tonight we are playing the Angels at Petco Park in the first of two games in the So-Cal exhibition games. I can’t believe we’re going to be in Petco!! Very exciting!!