Chris Young started and threw two great innings. He just made one mistake to Mitch Jones, who hit a bomb to give the Dodgers a 1-0 lead. They added to that lead in the 5th with an unearned run when second baseman David Eckstein booted a ball. But the Padres grabbed one of those back with an RBI by Eckstein (redemption!) in the bottom of that inning. In the 6th, Gabe DeHoyos gave up three runs, including a two-run homer from Blake DeWitt to increase the Dodgers’ lead to 5-1. The Padres fought back a little, getting a run in the 6th and the 7th each. They also got a run in the bottom of the 9th, but it was not enough. We lost to the Dodgers 5-4.

Our pitchers actually did pretty well. CY only allowed one run, but otherwise was really sharp. Cla Meredith, Chris Britton, Ernesto Frieri, Will Inman, and Mike Ekstrom all threw scoreless frames. Our hitters had 10 hits. Kyle Blanks and Nick Hundley has two hits each. You know, we haven’t scored that many runs, but our hitting has been pretty good. We’ve scored four runs in the last three games.

Today is an off-day, the first of four this month for the Padres. Tomorrow we will be facing the Texas Rangers in Surprise with Cha Seung Baek starting.

My two younger brothers are playing baseball with the city this spring, and my brother’s first game was last night. It was so cool to watch some baseball, even at almost the lowest level of play! It was really cold, but I had my Padres blanket, so I was pretty good. It was a neat game. My brother’s team lost like 8-3, but it was really fun to watch. I will definitely be going to many more of his games! I’m thinking that I’ll start doing write-ups and keeping score. It would be good practice for me. Anyways, here’s a picture from early in the game: 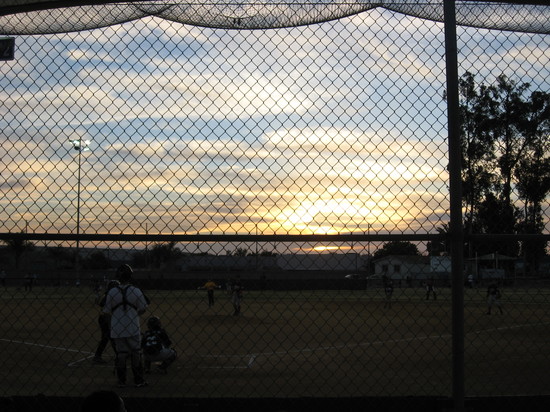 Thank you for your great response to my latest tribute to Trevor. I feel like that is one of the best pieces I have ever written. It really just flowed from my heart to my fingers. So, thank you!