I’m sorry. I can’t help it. In the Latest Leaders, I got #31. And I’m going to do something kind of radical this time (unless you want to learn about Robert Woodard again…I didn’t think so. Besides, I just brilliantly figured out that #31 is retired for the Padres. I could dedicate this to him, but…). So, in a warped version of Jimmy’s tradition, I dedicate my #31 ranking to #51, baseball’s all-time saves leader, forever a Padre, Trevor Hoffman. 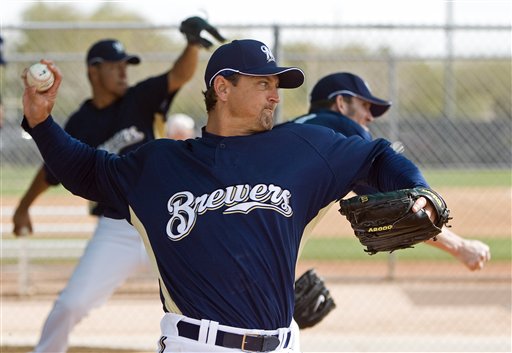 Trevor, you’re really a Brewer. I mean, I’ve known for months that you will be in THAT uniform, but to see you there, it’s tough, man. Not having you in Peoria is really hard. I only experienced one Spring Training that you were in. But it was really neat to hear you pitch in Spring Training 2008, after that long hard offseason of dwelling on Game 163. It was so great for you to get out there and pitch some scoreless innings.

This year, you are certainly doing your own thing. I mean, you’re not even with the team as they go play their games! If you were still with the Padres, would you do the same thing? Pitch bullpens instead of pitching in the actual games? Stay behind in Peoria while we went to play other teams? I guess we won’t find out until next year, when you sign with the Padres again (*cough* *cough* hint hint).

It’s been so different here without you. There’s definitely something missing from the clubhouse, but I think the guys have accepted that you aren’t going to be there all season. That’s really tough, but they gotta accept it. It’s no use dwelling on the past, on what could have been. What happened isn’t going to change. The guys have got to move on, and so do the fans.

That’s going to be really hard. I don’t think we will really be able to say good-bye until the Padres have a save situation for the first time in the regular season. Normally (because Trevor Time is normal; it’s what we’re used to), we stand in anticipation after the last out in the bottom of the eighth. The bells start. BONG. BONG. BONG. We smile, starting to scream and jump around as the all-time saves leader, the Padre, trots out of the bullpen. But this time, we will stand, waiting for the bells, and they will never come. No, this time Heath Bell will come lumbering out of the bullpen. Instead of the leg kick, we will watch the arm-slinging. Heath is cowboy-style: big, lumbering, jerky, and fast. You are all style, very smooth. Leg way up, glove to your chest, then arms spreading out as your leg comes down and you push off, smoothly releasing the ball towards home plate. Soft thud in the catcher’s glove as the bat totally misses that deceptive change-up.

We will miss Trevor Time. That will probably be the hardest to deal with. But you know what we will also miss? We will miss YOU, not just as a pitcher, but as a person. We won’t get to watch you warm up during BP, we won’t be able to try to get your autograph. We won’t see you wandering in the streets of San Diego with your wife and kids. We won’t get to see your boys playing around in the ballpark. We won’t get to see you doing all the wonderful work in the community that you’ve been doing for so long. We won’t get to read your insightful quotes in the newspaper, we won’t get to read about your humorous exploits (the ball cart in BP…LOL). Oh, sure, we can read about the stuff you do with the Brewers, but it’s no where near the same. I have no doubt that you and the Padres will meet sometime this year, whether it be in Spring Training, Petco Park, or Milwaukee. I have a feeling that you will pitch against the Padres sometime this year, and it’s going to be hard. But if you come out to close a game against the Padres in Petco, you are going to get a wonderful ovation.

Trevor, it’s going to be a long season. There will be many moments where we say, “I wish Trevor were here” or “Trevor would have been able to save that game”. It’s going to be hard. It will be so bittersweet to see you in the Brewers uniform. We know that you will do very well for the Brewers, and we wish you all the best. But we can’t help but think that you could be doing that in the Padres uniform. You are San Diego, man. We will miss your humor, your class, your kindness, your presence.

But we are holding on to the hope that you will come back to San Diego next year. We’re CLINGING to that hope. And until you say otherwise, we will expect that you are coming back. You wanted to be here this year. You gave San Diego the chance to bring you back. But you had to move on, so you went to the Brewers. We miss you so much, Trevor. I can’t believe you’re gone! But we want to see you in the Padres uniform again next year. After a whole season without you, we want to relieve the pain. We want you to end your amazing career here in San Diego. We want our star closer back. We want the All-Time Saves Leader back in San Diego. And we’re clinging to the hope that that will happen. We love you, Trevor!

Thank you so much to all my readers for getting me to where I am. Without you guys, this blog had no purpose. So thank you so much for reading about Padres baseball, and I’m looking forward to covering the Padres all season! THANK YOU!!