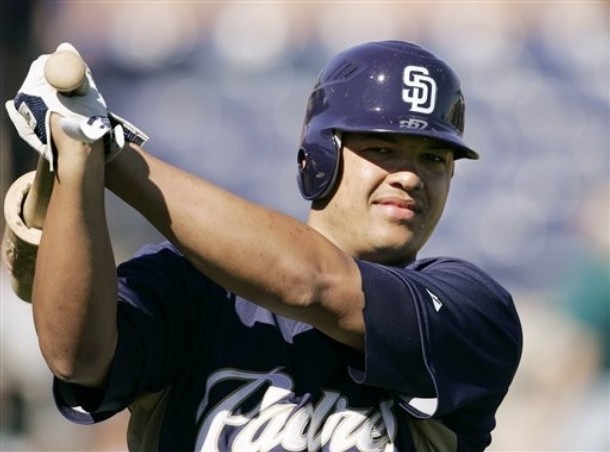 Last night our pitching was polluted. It was BAD. And it all started with Dirk Hayhurst. Once the Padres gave him a 1-0 lead, he quickly gave Colorado 4 runs in the 3rd. He was gone after the 4th. Our hitters were able to come back, a little. Adrian had a RBI single, and Nick Hundley homered. But this game went foul real fast. Soon, every relief pitcher was running into trouble. The only one unscathed was Brett Tomko, who went two hitless innings. Buddy had to dig deep in his bullpen. The showers must not have been working, ’cause these guys stunk. Eventually, we lost 9-4. Even though he hit the homer, Nick had a really bad night behind the plate. I guess the bright spot is Will Venable (pictured). Just called up from Triple-A, he got the start in center. In his first AB, he hit a triple and scored our first run. Nice.

Josh Geer is going to make his major league debut today. I am very worried about the bullpen. If Geer can’t make it through the 4th, we are going to have a LOOONG night. GO PADRES!!!!