It was the bottom of the 9th in a 2-2 game. Scott Hairston, usually our walk-off guy, stuck out. Then Brian Giles hit an infield single and was thrown out on a bizarre play. But Luis Rodriguez singled to set up Jody Gerut. Gerut was 0-for-4. He had made a great play in center, but nothing was going at the plate. Until he saw John Rauch. Now, the Padres have hit this guy very well. Jody hasn’t be fooled, that’s for sure. It was Rauch vs. Gerut in that game with the bases loaded when Jody should have had a bases-clearing double. But Alex Romero made that spectacular catch. Jody had a homer against Rauch, and last night he completely killed the first pitch from him. WE WIN!!! I don’t think we’ll be seeing Rauch in this series again. Jake was great. 6 innings, 2 runs, 4 hits, 7 strikeouts. He threw 121 pitches, though. Clay Hensley allowed a hit, but Heath was great. Trev breezed through his inning, even though it was a tie game. Luis is really heating up. He had a double, triple, and single last night. He has also been solid at SS. We played good baseball last night. Everyone in the starting lineup (including Jake) had at least one hit, except Kouz. Giles had 3 hits. I am so glad that we got a win! 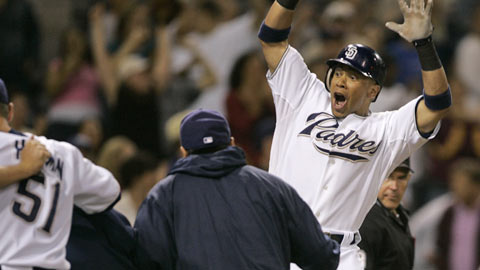